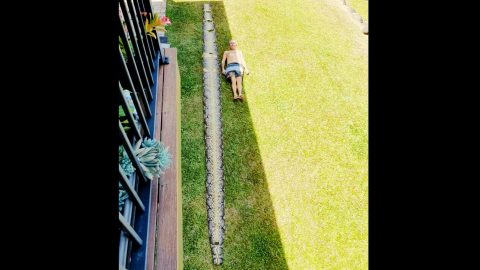 Stuart Morris was on his daily walk in Freshwater, a suburb of Cairns in Queensland, Australia, when he made a surprising discovery. He found a huge snake skin that looked like it came from a snake far bigger than any he had ever seen in the area.

“I didn’t think we got snakes that big around here,” Stuart remarked in an interview with the Australian Broadcasting Corporation, or ABC (not the same company as the U.S. ABC).

Stuart said he initially took a few pictures of the skin and continued on his walk. On his way back, he noticed the skin was still there, so he decided to take it home.

“I soaked it in water in the laundry tub because it was all stiff and I laid it flat on the floor in the sun to dry it,” he said.

That had to have been quite the task, since the snake skin Stuart discovered is seven meters long. That’s nearly 23 feet!

Stuart’s son, Dylan, shared a photo on Facebook comparing his father’s height to the length of the snake skin.

Dad found a snake skin on his walk the other day ! 7 meters long!! 😳

Originally, Stuart thought that the snake skin was one that had been naturally shed by a native scrub python. But after taking a closer look, Stuart concluded the skin actually came from a snake that had been purposefully skinned by a person.

“I can’t believe someone would actually do that to a beautiful creature like that,” he told ABC.

Snake expert David Walton seems to support Stuart’s thoughts. He believes the skin doesn’t come from a scrub python, but rather, a reticulated python.

Unlike scrub pythons, reticulated pythons are not native to Australia. It is actually illegal to keep them unless they are in a zoo.

“The snake could have been smuggled in…and someone tried to skin it, or the skin has been smuggled into the country,” David told ABC, going on to add that the whole situation is “very dodgy.” David noted that even if the snake itself was never brought into Australia, it is still illegal to import its skin.

In light of this new information, Stuart intends to contact environmental authorities about his discovery.

“I’ve got a phone number to ring and I’m going to see if they can shed any light on it and I hope they can find out more about it,” Stuart said.

If you’d like to see how pythons naturally shed their skin, check out the video below.