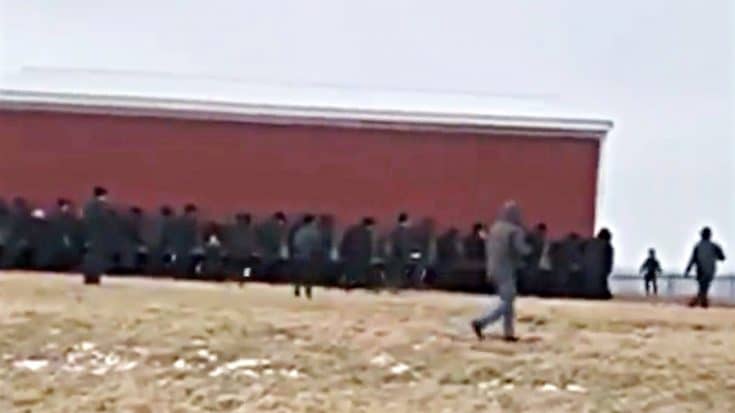 The Amish are known for being a tight-knit community who lean on each other, but what happened on March 9, 2019, in northern Knox County, Ohio takes the notion of depending on one another to a new level.

Approximately 250 Amish men stood shoulder to shoulder and moved an entire barn 150 feet to a new location. When they reached the area where the barn needed to be set down, they moved as a group to rotate the barn into the correct position.

As the men get the barn to its new location, women can be seen flocking front and center in the video. The video captures their excitement at the men moving the barn quickly and correctly. The women rejoice as the barn is set down in its new resting place.

The Amish are amazing…….250 men move a building, by hand, for a neighbor. See video – it is real. I've done the math, it is possible. The teamwork must have been awesome!Credit – littlethings.com:Early one morning in March 2019, hundreds of Amish people traveled via horse-drawn carriages to Joseph Hochstetler’s farm in Knox County, Ohio. They were there to complete one mission: to move the pole barn from one side of the farm to the other, completely by hand, in the dead of winter.Approximately 250 men gathered around all four sides of the barn and began to lift and walk it… all in one single piece. The women watched as the men maneuvered the giant structure, commenting as they twisted and straightened the barn until it was safely placed in its new position across the field nearly 200 feet away.The entire process took less than five minutes. Amazing!

It’s hard to say how often Amish people show such incredible feats of teamwork, as they are reluctant to use new technology, such as cell phones and video cameras. Amish people are numerous in the Ohio, Indiana, and Pennsylvania areas, and tend to keep to themselves in small farming communities.

This astonishing feat took place at the farm of Joseph Hochstetler, a member of the Amish community.