By Manly Bryant on December 5, 2019
Advertisement 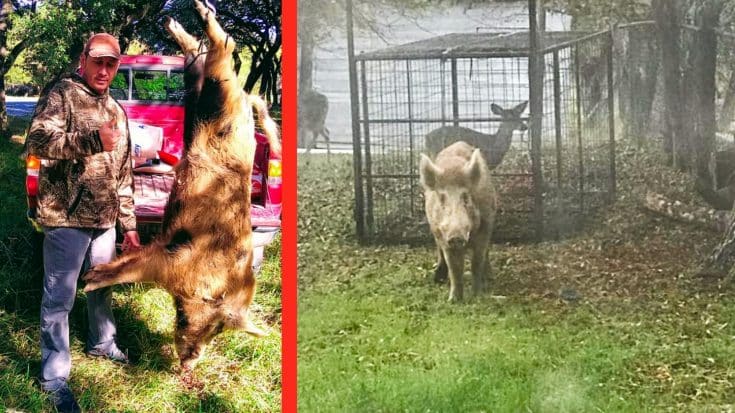 After a massive, nearly 300-lb, wild boar had been terrorizing a Texas family for weeks, it finally met its maker.

The Texas family had been worried about their pet pot-bellied pig that was being constantly harassed by this wild boar for quite some time. Then, unexpectedly, the family woke up on the morning of December 2nd, 2019, and saw the boar chasing a deer in their yard.

The deer had gotten caught in a trap set up by Ortiz Game Management that was intended to catch the feral hog. This is when the family alerted the professionals to the situation and they came to remove the hog before he ran away.

According to the US Dept. of Agriculture, 2.6 million feral hogs live in the Lone Star State alone. Other states in the country also suffer from problems with feral hogs and many have year-round open hunting season for them as they can be quite the menace.

These feral hogs often are the culprits of property destruction and injuries with one woman even being killed by a pack of feral hogs in southeast Texas last month.

After officials came to take out the hog from this family’s back yard, Bexar Brothers posted the photos of the feral hog on Facebook and shared the story.

Read the full post below and watch a video of two wild hogs fighting as well.

We had a CRAZY MORNING Today! Woke to an urgent service call for a large boar in a families backyard in San Antonio! The…