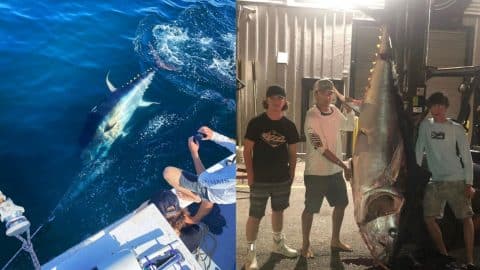 17-year-old boat owner Wyatt Morse from Portland, Maine was on the ocean fishing with his buddies, 16-year-old Martin Scanlan from Aspen, Colorado, and 16-year-old Griffin Buckwalter from Scarborough when they hooked onto an insanely big Bluefin tuna fish.

“It was the most hectic and crazy fish I’ve ever caught,” Wyatt told Bangor Daily. “It was insane.”

Off the coast of Portland, Maine, a group of teens recently reeled in the catch of a lifetime.Friends Martin Scanlan,…

The boys said they motored the boat about 40 miles off the coast of Portland around 9:45am and were standing around chatting it up when the Bluefin tuna took the bait. It bent the pole all the way down to the water and the boys yelled and quickly got ran over to tend to the rod.

“It was brutal. I had time to take a nap during the fight, woke up, and they were still fighting it,” Griffin said. “I ate some food, had some lunch, and I’m just hanging out, watching these guys work their butts off.”

Griffin had been filming the whole time hoping they would catch something good on camera. Indeed, they did. However, it took over seven hours to record the battle and they didn’t even see the fish until six hours into the fight because it swam down as deep as it could, trying to get away.

“We didn’t see the fish until 6 hours into the fight. He just stayed deep — 300 feet of water — and he didn’t want to come up,” Wyatt said. “They just they’re so strong. It’s incredible.”

The fish drug them 10 miles away from where they originally hooked it before it finally tired out and gave up. At this point, they realized it was way too big to get it into the boat so they drug it all the way back to shore.

The fellas measured the Bulefin and it was a gigantic 109 inches from its nose to the fork of its tail and weighed a hefty 750 pounds. Griffin posted the video to his YouTube channel on July 6th, 2020, that’s below this article where you can watch the battle to reel it in.

Warning: This video contains some adult language and may not be suitable for all audiences.