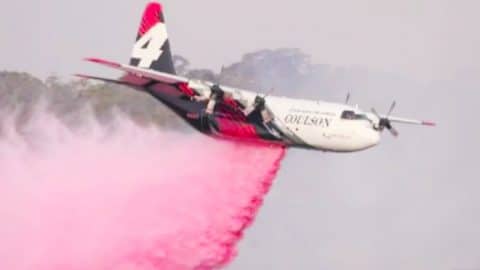 Parts of Australia may have received much-needed rain in the midst of massive wildfires, but other parts of the country are still up in flames.

Shane Fitzsimmons, Commissioner of the New South Wales Rural Fire Service, filmed the American firefighters’ reception as they walked through the Sydney airport.

“Coming through, all gathered gave a spontaneous & lengthy round of applause, reflecting the gratitude & admiration we all have for their generosity,” he wrote.

US fire fighters arrived at Sydney Int Airport this week, on their way to assist with fire fighting in Victoria.
Coming through, all gathered gave a spontaneous & lengthy round of applause, reflecting the gratitude & admiration we all have for their generosity. #NSWRFS @NSWRFS pic.twitter.com/5epg5y4qxX

Sadly, three U.S. firefighters just lost their lives as they worked to battle the fires that continue to consume Australia.

Coulson Aviation out of Oregon posted a media release on Thursday (January 23) stating that one of its Lockhead C-130 air tankers “was lost.” The plane was carrying retardant and was on a firebombing mission when it crashed.

“The accident is reported to be extensive and we are deeply saddened to confirm there were 3 fatalities,” read the statement.

Posted by Coulson Aviation – Next Gen Firefighting on Wednesday, January 22, 2020

The identities of the three U.S. firefighters have not been revealed. Following the firefighters’ deaths, the overall Australia fire death toll has now gone up to 31.

Fitzsimmons, the Commissioner of the New South Wales Rural Fire Service, confirmed the firefighters were American. FOX News quotes him addressing the crash, saying he is unaware of the cause. “There is no indication at this stage of what’s caused the accident,” he said.

FOX News reports the Australian Transport Safety Bureau, the national air crash investigator, and the state police will all band together to investigate the crash.

New South Wales Premier, Gladys Berejiklian, shared her condolences for the families of the three American firefighters who lost their lives. She said all flags in New South Wales would fly at half-mast as a sign of respect.

Out of respect for the three US firefighters who lost their lives operating a Large Air Tanker, flags will fly at half mast in NSW tomorrow.

We too, join Berejiklian in sending our thoughts and prayers to the families of the three firefighters. May they rest in peace.

You can learn more about this tragic accident by tuning in to the news report below.