By Jennifer Pernicano on December 3, 2018
Advertisement 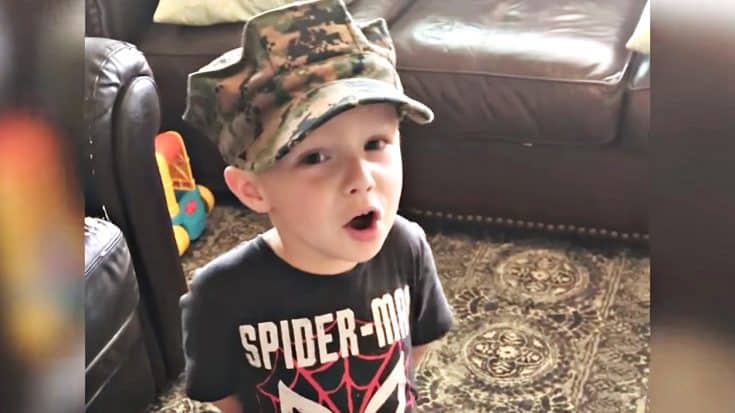 Most 3-year-olds are working on learning their ABCs and 123s but for one little tyke, being three means learning the Marine Corps Hymn – every word of it.

While the origin of the Marine Corps Hymn is somewhat foggy due to the passage of time, it is believed that the words to the song originated in the 1800s. In 1929, the Commandant of the Marine Corps approved parts of The Marines’ Hymn to be the official version.

Since then, Marines everywhere have stood proudly and sung the powerful tune. Full of meaning and honor – the hymn carries a level of significance that most civilians could not comprehend.

“From the Halls of Montezuma
To the shores of Tripoli;
We fight our country’s battles
On the land as on the sea;
First to fight for right and freedom
And to keep our honor clean;
We are proud to claim the title
Of United States Marine.

Our flag’s unfurled to every breeze
From dawn to setting sun;
We have fought in ev’ry clime and place
Where we could take a gun;
In the snow of far-off Northern lands
And in sunny tropic scenes;
You will find us always on the job
The United States Marines

Here’s health to you and to our Corps
Which we are proud to serve;
In many a strife we’ve fought for life
And never lost our nerve;
If the Army and the Navy
Ever look on Heaven’s scenes;
They will find the streets are guarded
By United States Marines.”

According to Military Kind Stories, one kid started picking up on the words when his father would sing The Marine Corps Hymn to him every night. After getting a video of the little one belting out the words, he quickly went viral – gaining almost 2 million views in less than a day!

And people are showing more love and support than ever. No matter what branch they are from, or even if they are a civilian – people across the board are supporting the little guy’s love for the Marines.

You can watch what everyone is talking about in the video below and let us know what you think in the comments!