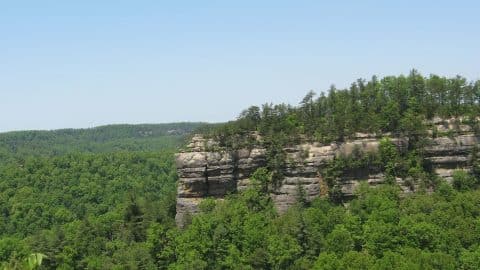 According to officials in Campton, Kentucky, a 4-year-old boy fell down a 70-foot cliff at Red River Gorge in eastern Kentucky and managed to walk away without being seriously injured.

Officials said the boy and his family were hiking near Princess Arch on Friday when the boy slipped and fell. The 4-year-old was said to have hit multiple ledges on the way down the cliff before stopping at the bottom 70 feet below.

The boy’s father scrambled after him while calling for help and it wasn’t long after that before the Wolfe County Search and Rescue Team showed up to assess the situation.

The team was relieved to find that the 4-year-old was alert and talking and they went after him. The rescue team was able to get the boy and he was taken to the hospital where he was checked for injuries and turned out to be just fine.

Red River Gorge is a 29,000-acre plot of land within the Daniel Boone National Forest and is a cliffy wilderness that has more than 100 natural sandstone arches. Go ahead now and watch the video below to see 10 places amazing places at the Red River Gorge.