By Miranda Raye on September 4, 2019
Advertisement 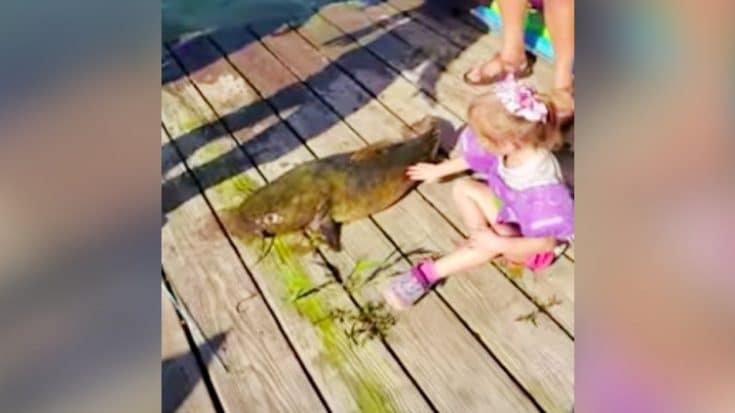 In 2018, the Massachusetts Department of Fish and Game announced a remarkable catch that was made on Jamaica Pond. A three-year-old boy named Zach managed to reel in a “large” rainbow trout, and did so using his Spiderman fishing rod.

Thousands were stunned to see that such a little guy was able to catch such a big fish. And with a children’s fishing pole at that!

Earlier this month, Zach (age 3) caught one of the large rainbow trout that MassWildlife stocked in Jamaica Pond with @MassGovernor (on his Spiderman® fishing rod, of course). Nice catch! For all trout stocking updates, check https://t.co/6xBllrNa63 (photo: Phil Kidd) pic.twitter.com/SLqQmkZkTX

It turns out that Zach isn’t the only expert junior fisherman. There’s a little girl named Josie whose 2019 catch is equally impressive!

In a now-viral video, four-year-old Josie can be seen enjoying a day out fishing with her parents, Steve and Ashley, and her two cousins. Her dad rigged her Frozen-themed children’s fishing pole with a 50lb line, and then waited to see what Josie would catch.

After a while, there was a tug on the line, and Steve jumped in to help Josie secure her catch. Josie was excited to bring her fish to shore, but became even more overjoyed when she saw how big it was.

Josie’s family used a net to pull her catch up on the dock. Everyone was shocked to see that the little girl had just reeled in a massive flathead catfish!

This little girl managed to reel in a 33-pound #fish with her 'Frozen' fishing rod (and a little help from her dad!) We're thinking there's a 'let it go' joke in here somewhere ??

Watch her epic catch, which was caught on camera, here: https://t.co/CIZwIIuUht

The fish ended up tipping the scale at 33lbs…which is three pounds more than Josie weighs!

But the fish isn’t as long as Josie. She got down on the ground beside it to see how she compared to its size, and was happy to see that she was “taller” than the fish.

You can watch Josie reel in her big catch and then celebrate it by tuning in to the clip below. She’s a master fisherman in the making!