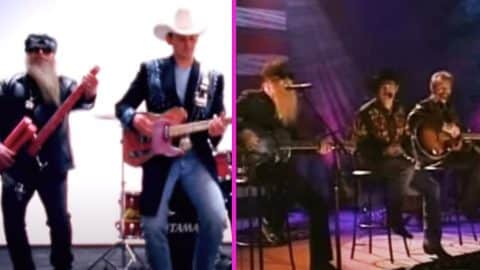 The rock/blues band ZZ Top was founded in Houston, Texas in 1969. There were some early shakeups in membership, with vocalist and guitarist Billy Gibbons remaining the one constant.

Eventually, drummer Frank Beard joined the group and later introduced his American Blues bandmate, Dusty Hill, to Gibbons. Hill became a member of ZZ Top soon after, and served as its bassist. He also sang lead and backing vocals and played the keyboard.

Gibbons, Beard, and Hill continued to perform together as ZZ Top up until Hill passed away on July 28, 2021. Over their 50+ years together the group released iconic songs such as “La Grange,” “Tush,” “Sharp Dressed Man,” and “Gimme All Your Lovin’.”

Even though ZZ Top is a rock group, they have long been welcomed into the country music community. They’ve often collaborated with some of country music biggest stars, and have even made appearances on country awards shows and television programs.

Join us in taking a look back on five of ZZ Top’s unforgettable country music collaborations. See if your all-time favorite performance appears in our list!

Only Gibbons contributed to this performance at the 2016 ACM Awards, but it was too good not to mention in our list!

According to the  ACM Awards‘ executive producer RAC Clark, Miranda Lambert had originally intended to play new music at the ceremony. But when the new music wasn’t ready on time, she had to come up with another plan.

Clark said it “came up” that Lambert could sing ZZ Top’s “Tush” and it seemed like the “perfect” fit for her. She got ahold of Keith Urban and asked if he’d like to play guitar during the performance. He agreed, and then Clark got in touch with Gibbons so he could be involved as well.

Watching their performance on the ACM Awards, you’d never guess it all came together at the last minute!

Country met rock and roll when ZZ Top united with Jamey Johnson to sing a few songs at the Ryman Auditorium in Nashville in 2013. In addition to singing “La Grange” and “Tush,” they also sang a cover of a country music classic.

ZZ Top and Johnson joined forces on Johnny Cash‘s “Folsom Prison Blues,” and it was outstanding!

ZZ Top’s Ryman performance wasn’t the first time they collaborated with Johnson. They previously covered Johnny Paycheck‘s “11 months and 29 days” together at the Houston Rodeo in 2012.

Brad Paisley recorded ZZ Top’s smash hit “Sharp Dressed Man” in 2002 for a tribute album titled Sharp Dressed Men: A Tribute to ZZ Top. Paisley released a music video to accompany his version of the song, and ZZ Top starred in it with him!

You’ll also notice some other country stars in the clip, such as Bill Anderson, the members of Lonestar, and Tracy Byrd.

ZZ Top and Brooks & Dunn were the featured stars of the third episode of CMT’s Crossroads series. The series pairs country artists with artists from other genres…and some extraordinary collaborations emerge as a result.

The setlist for ZZ Top and Brooks & Dunn’s Crossroads episode was extensive. We chose to feature their performances of “La Grange” and “Gimme All Your Lovin'” in the video above to give y’all a taste of what the episode was like. Or maybe it will jog your memory if you watched the episode when it aired in 2002!

As a bonus, check out the below video of Brooks & Dunn singing their song “Hard Workin’ Man” with ZZ Top during the same episode of Crossroads.

Which one of the performances featured in this list is/was your favorite?