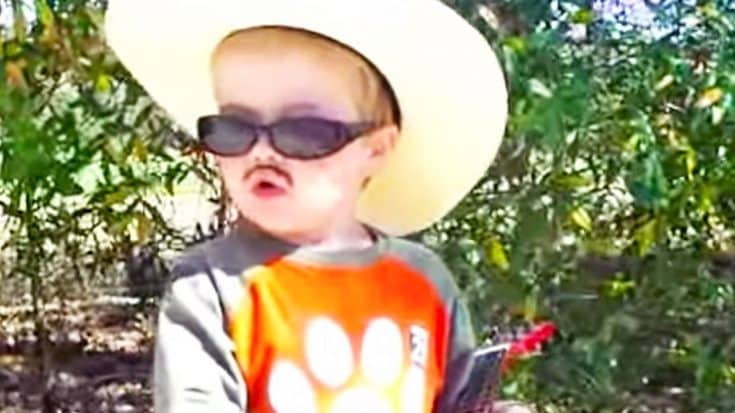 In 2008, Alan Jackson released a song that had every country guy and gal singing out loud. Called “Country Boy,” Alan pours on the smooth talk as he speaks to a pretty gal he sees walking by.

“Excuse me ma’am, I saw you walkin’,” he sings, before continuing. “I turned around, I’m not a stalker. Where you going? Maybe I can help you. My tank is full, I’d be obliged to take you.”

There are few country gals out there who were able to resist Alan’s charm in “Country Boy,” which is perhaps a huge part of the reason why it was a number one hit. But no one will be able to resist one cutie who sang his own unique version of “Country Boy.”

Five-year-old Landon may be the biggest fan of Alan’s that we’ve ever seen. This little cowboy loves living out in the country, and he proved that when he donned a cowboy hat, sunglasses, and even a fake mustache to look just like Alan.

But that wasn’t all Landon had in store. Standing in the back of his little green truck, Landon grabbed his guitar and started singing the chorus of “Country Boy” over and over again.

If this isn’t adorable, then we don’t know what is!

The best part comes close to the end when Landon suddenly stops mid-song to react to a stinky smell. It turns out they were spreading manure on the fields near his house, and Landon was not a fan.

As hard as he tried to keep singing, Landon just couldn’t handle being outside any longer! Watch his super cute performance below.