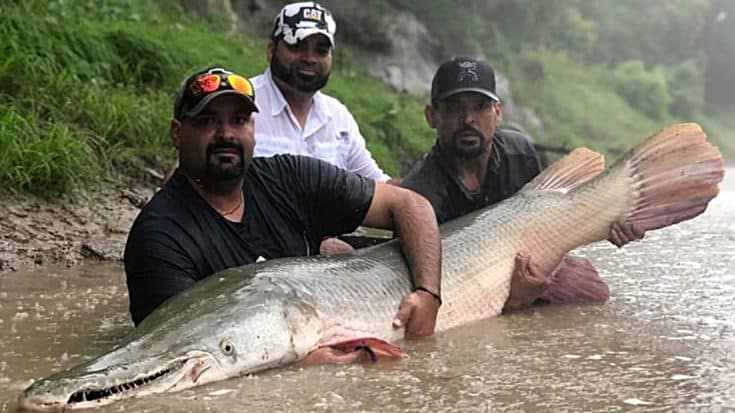 Imagine traveling to Trinity River, one of the prime locations for reeling in the largest freshwater fish in the state of Texas, the ginormous alligator gar.

These massive fish are often called “living fossils” because they have retained some morphological characteristics of their earliest ancestors from 100 million years ago.

They got the name alligator gar because their mouths look like that of an American alligator and these bad boys have been rumored to grow a whopping 10 feet long. Back in February 2011 one man reeled in the largest alligator gar ever officially recorded caught in Mississippi and it was an impressive 8-foot 5-inches long and weighed 327 pounds.

“The largest fish was caught about two weeks ago and weighed over 200 pounds. She was 7 feet, 6 inches and had a girth of 40 inches,” Chris said. “The other fish was 7 feet, 4 inches.”

He says he uses fresh-cut carp as bait and when he captures them he always sets them free, of course, only after posing for a picture. The Texas Parks and Wildlife actually enforced a statewide bag limit in 2009 on capturing only one per day to avoid overfishing them.

Bubba Bedre, the man shown in the image below was on Animal Planet’s TV Show River Monsters in 2009 where he also caught a gigantic 8 foot, 4 inches, and 265-pound gar.

Even though alligator gar look vicious, they have never been known to attack humans. Their teeth are specifically designed to hold and subdue prey, not tear them apart.

Ambushing their prey is how they typically hunt and tend to do it at night when the visibility is less clear. They mostly eat fish but are also known to eat small birds and mammals that float on the water’s surface. Take a look at a few ginormous alligator gar in the video below!