6 Of The Most Memorable Country Songs About Dogs 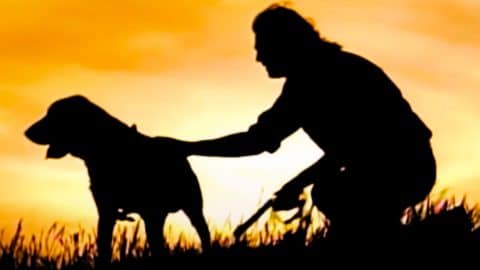 Dogs are considered to be man’s best friend, and they’re certainly a country guy or gal’s best pal. So that’s why there are so many country songs out there about canine companions.

Some of these songs have a comical tone, like the famous “Ol’ Red.” But many country songs about dogs are much more emotional. Singers turn to pen and paper to write odes to their beloved pets who have passed away. As listeners, when we tune in to such songs, we too, are reminded of the dear dogs that were once part of our lives, but have since passed on.

Here, we want to showcase six of the all-time best and most memorable country songs about dogs.

Whether they’re funny, sentimental, or just downright sad, these tunes are worth listening to time and time again with your pup snuggled up by your side.

“Can’t Be Replaced” by Dierks Bentley

Dierks Bentley‘s fans came to know and love his dog, Jake. He starred in Dierks’ music videos, appeared on stage with him at the Grand Ole Opry, and was featured on the cover of his debut album.

Jake passed away in 2016 at the ripe old age of 15. To honor him, Dierks wrote and recorded a song titled “Can’t Be Replaced.”

“Can’t Be Replaced” was the last track on Dierks’ 2016 album, Black. You can hear the pain in his voice as he sings about moving on through life without Jake:

“For fifteen years right by my side. From a single man to three kids and a wife. Friends come and go, but when it comes to Jake, there’s just some things that can’t be replaced.”

Those lyrics make us tear up every time!

“Little Boys Grow Up and Dogs Get Old” by Luke Bryan

On the sentimental side of things when it comes to sounds about dogs, there’s Luke Bryan‘s “Little Boys Grow Up and Dogs Get Old.” He released the song in 2015 as a Target exclusive bonus track on his album Kill the Lights.

Luke, who co-wrote the song, opens by singing about a black lab named Bandit his father gave him when he was young. He fondly remembers the fishing trips they went on and the summers they spent together. They grew up side by side, with Luke saying, “I don’t know if I raised him or he raised me.”

The song ends with Luke remembering the moment he moved away from home to chase his musical dreams in Nashville. Bandit was 14 by then, and Luke recalls telling him goodbye.

He ends the song on an emotional note, singing, “God I wish I didn’t know. Little boys grow up and dogs get old.” That tugs at the heartstrings!

In 2016, Mo Pitney released his debut studio album, Behind This Guitar. The album contained a track titled “It’s Just a Dog,” which like the two previous songs mentioned in this list, is a bit emotional.

Mo tells a story about how he was driving home one night when he noticed a dog walking along the side of the highway. He told himself to ignore her, since she was “just a dog.”

But something made Mo go back, and he picked the dog up. She became his constant companion, who slept at the foot of his bed and rode in the passenger seat of his truck.

When she finally passed away ten years later, Mo found himself crying on the side of the road as he realized she wouldn’t be riding beside him in his truck any longer. He ends the song by singing, “Why am I pulling over on the shoulder with tears in my eyes? It’s just a dog, right? She was just a dog, right?”

From the tone of Mo’s voice, you can tell his trusty pup was far more than “just a dog.”

The oldest song featured on this list, Dolly Parton recorded “Cracker Jack” in 1973. It was included on the 2007 reissue of her hit album, Jolene.

Like the previously mentioned songs, “Cracker Jack” has Dolly singing about a former dog of hers. She was just a child when she found little Cracker Jack wandering by the river as a puppy.

She took him home, cleaned him up, and fed him, and from that moment on, he was her devoted companion. He slept by her bed and would roam with her through the woods and fields.

Toward the end of the song, Dolly sings about how her dear furry friend has since passed on. “He only lives in memories now,” she says of the pup. “But often I think back, to the days of childhood, the days of Cracker Jack.”

It’s such a sweet little song!

Chris Stapleton wrote “Maggie’s Song” the day after his family’s dog, Maggie, passed away. He included the track on his 2020 album, Starting Over.

He starts from the beginning, singing of how he found his “old friend” Maggie in a shopping cart one day when she was just a puppy. He and his wife, Morgane, took her home, and she loved to run wild and free.

After Chris and Morgane had their kids, Maggie became their loyal protector. But she still always found time to run free and chase squirrels to her heart’s content.

As the song nears its end, Chris sings of the rainy Monday when Maggie passed away.

“She put her head on my hand, like she’d done so many times. I told her she was a good dog, then I told her goodbye.”

Chris concludes the song by singing how he feels confident he will never know a better dog than Maggie.

You know we couldn’t make a list of country song about dogs without mentioning “Ol’Red.”

Unlike all of the other songs on this list, there isn’t anything emotional about “Ol’Red.” It’s just a fun, rowdy song that has been passed down through generations.

George Jones was the first artist to record this tune about a man who sneaks out of prison by gaining the trust of the tracker dog, Ol’ Red. As Ol’ Red’s caretaker, the narrator starts taking him for evening runs to meet a female Bluetick Coonhound penned up in the swamp.

Blake Shelton‘s 2002 version of the song is the most well-known. It is now considered one of his signature pieces, and inspired the name of his Ole Red restaurant (which has four locations).

All in all, “Ol’ Red” is probably the first song that comes to mind when people think of country songs about dogs. Rightfully so!

Which one of the songs in this list is your favorite?