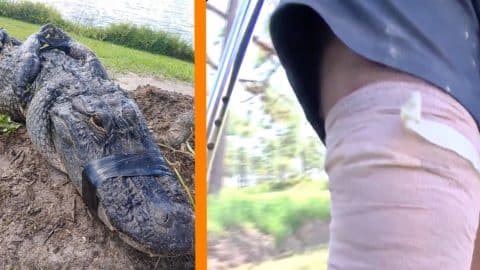 61-year-old Mark Johnson left home to walk his dog. While they were enjoying their time together near a canal in Port Saint Lucie, Florida, a 9-foot gator attacked them.

UPDATE – Gator that’s close to 9-feet long was captured today after it attacked a Port St Lucie man 3 days ago.

“We were walking back,” Mark told CBS12. “I had him on a leash. A gator had spotted us, apparently, and was coming after us. I turned my leg but my foot got caught in the mud.”

While Mark got stuck in the mud, he unleashed his dog and asked him to go get help. Unfortunately, there was no way for Mark to escape the aggressive gator attack. The reptile quickly grabbed Mark right above his knee and Mark tried to pull away as best as he could.

“I felt the pressure. He was clamping down onto my leg and I felt he was going to start to do his [death] roll,” Mark shared with CBS12.

Mark’s adrenaline went up and he decided to fight back against the alligator. He was afraid the gator would dismember or drag him to the water. It was bigger than he: eight feet six inches.

“I’m not going to let you take me in the water,” Mark shouted at the gator.

To save his life and leg, he put his fingers in the alligator’s eyes as deep as he could which made the beast open his mouth so Mark could escape. The alligator was later caught by trappers.

“The realization hit me today at how lucky I was. That eight to 10 seconds will be burned in my mind the rest of my life,” Mark explained.

A Florida man is recovering after being bitten by an 8-foot alligator while walking his dog over the weekend. More: https://www.fox4now.com/news/national/florida-man-attacked-by-8-foot-alligator-while-walking-dog