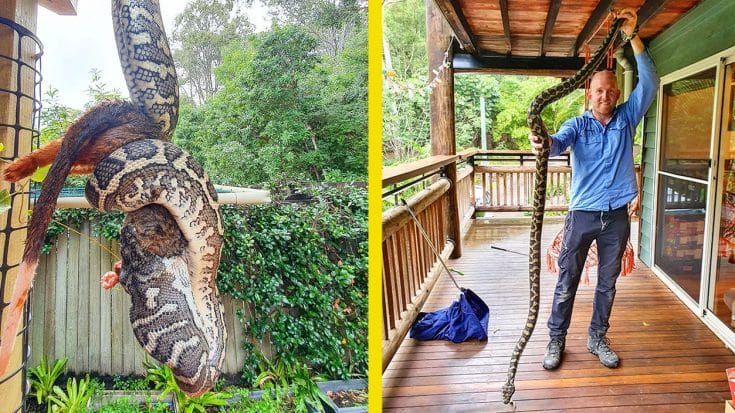 Stuart McKenzie is a 30-year-old snake catcher who lives in Queensland, Australia and has seen just about all there is -or so he thought. McKenzie was called out to a home on the Sunshine Coast in Queensland early on Wednesday morning after the residents spotted a nearly 7 foot carpet python slithering along their roof.

When he arrived on the scene he was shocked to see the snake dangling from their roof with a large ring-tailed possum hanging from its mouth. So as not to disturb the python’s meal, Stuart waited for an hour to allow the snake to finish ingesting the possum while he took some pictures.

Both animals are native to Australia. Carpet pythons are medium-sized pythons that are named for their beautiful markings, which resemble an oriental carpet pattern. Ring-tailed possums are marsupials that typically grow up to 2 pounds.

“When I arrived it was dangling there from the roof with the possum in its mouth. I realized it had only just started it’s meal so I knew then I had to wait for it to finish eating. I knew if I tried to take it away right at that moment, it would likely drop its food and not want to eat it again.”

Since the possum was already dead, McKenzie decided to let nature have its way and waited for the snake to finish its meal before capturing it.

Once captured, McKenzie transported it from the home and released it into nearby bushland so the python could digest its meal in peace.

“We got him back into the bush a long way away from homes. He will have found a nice and warm spot to stay warm and digest that huge meal over the next week.”

Watch the video below to see the footage McKenzie captured.