By Manly Bryant on January 15, 2020
Advertisement 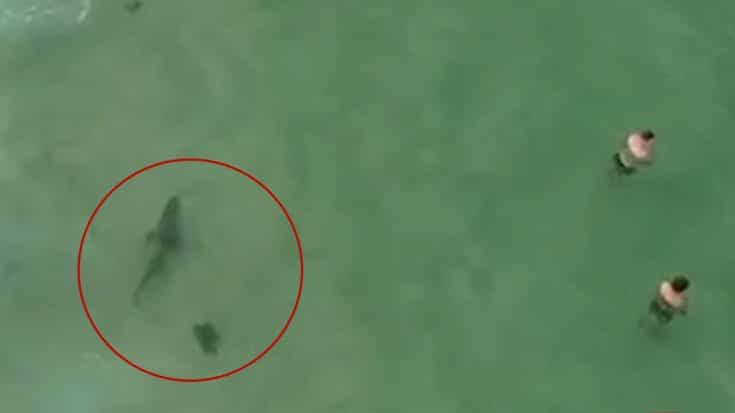 In Foster, Australia off the coast of New South Wales a couple of swimmers were enjoying a fun day at the beach when a guy piloting a drone spotted a 7-foot great white shark swimming dangerously close them.

The drone pilot, 17-year-old Cameron Grace showed the live footage to his aunt who was shocked that the boys in the water didn’t even know what was circling around them. She said she couldn’t just sit there and watch, she had to go down there and let the guys in the water know.

Rachel Walter, his aunt, ran down to the beach and into the water waving and screaming at them. The boys were completely oblivious to what was going on but they heard her call and came back to the safety of the sandy beach.

Experts say that this happens all the time and people just don’t know about it. For every one shark you may see there’s most likely 100 sharks you didn’t see, but they saw you – that is if you even get into the water. 34% of people who go to the beach don’t get in the water and 72% of people are scared of sharks.

Good thing is, sharks are normally not a threat to humans. Experts say they don’t like the taste of humans and when humans are bitten the sharks usually lets go. Regardless, it was nice of Cameron and Rachel to let the boys know about the shark just in case it was one of those rare situations.

Incredible vision shows what experts believe is a great white shark lurking within metres of swimmers on a New South Wales beach.It was spotted by a teenager using a drone. His fast-moving family raced to the shore and yelled at surfers to quickly get out.www.7NEWS.com.au #Sharks #7NEWS