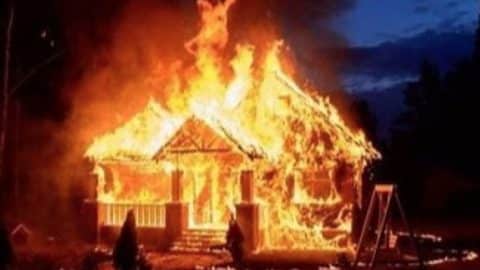 Nicole Davidson from New Tazewell, Tennessee said God woke her up in the middle of the night to save her family from blazing flames that were in the process of engulfing her house.

She woke up her husband who immediately grabbed a fire extinguisher to try to put out the flames while Nicole ran to wake up her two boys.

“He grabbed the fire extinguisher trying to buy me time to get the kids, and I grabbed the boys because they were closest to the fire,” Nicole told WVLT.

The flames were already blazing through the living room and were preventing her from getting to their 22-month-old girl who was sleeping in a crib in the bedroom. She quickly ushered the boys outside to get them to safety and then started panicking about her baby girl still inside. That’s when her 7-year-old son Eli stepped up with a brave heart.

He was able to get her out of the house and even though the home was completely destroyed, Eli saved his sister. No one was hurt and everyone made it out safe. The family is currently staying at a family member’s house down the street until they get a new spot.

A GoFundMe account was set up to help them financially.