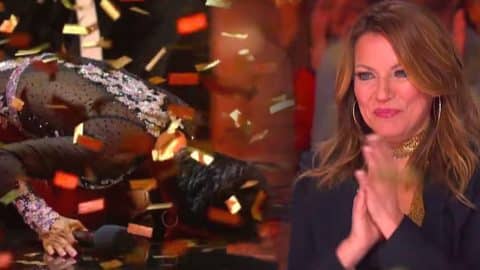 Typically, the judges panel on America’s Got Talent consists of four celebrities. But every now and then, the panel expands a bit to welcome a guest judge.

Guest judges first played a role in AGT during Season 10. Since the guest judge role was introduced, only one country singer ever sat in one of those famous chairs. That singer was Reba McEntire.

Finally, country music earned a second AGT representative when Martina McBride announced she would be appearing on Season 13 as a guest judge. She made the announcement through a teaser clip she posted to Instagram, and continued to hype up her appearance in the week leading up to her episode’s air date.

Can’t wait for you guys to see the newest @agt episode 🎊🎉 Mark your calendars… tomorrow on @nbc at 8/7c!

Finally, we got the chance to see McBride in action when her episode aired. While everyone was obviously excited just to see McBride on the show, they were more anxious to see which contestant would earn her golden buzzer.

If you watched the previous season of AGT, you may recall that eventual winner Darci Lynne Farmer earned a golden buzzer for one of her early acts on the show. Regular judges are able to use the golden buzzer as well, and Mel B pressed hers for Farmer that season.

As you can tell from watching Farmer’s reaction in the video above, it’s always a touching moment when an act earns a judge’s golden buzzer. But McBride’s golden buzzer pick may have had one of the most emotional reactions we’ve ever seen.

From the second 71-year-old Quin and her dancing partner Misha took the stage, the judges were spellbound. And that was just while they were listening to them talk!

So you can imagine how impressed the judges were as they watched Quin and Misha twirl about the stage in a routine that featured one jaw-dropping lift after another. Klum and McBride were especially moved by the showcase, and both gave a standing ovation.

But that wasn’t all that McBride gave the dancing duo. After praising Quin for serving as a source of inspiration to people of all ages, McBride slammed her golden buzzer down, which made Quin collapse to the floor in tears.

You can watch her emotional reaction to being selected as McBride’s golden buzzer pick in the clip below.