By Megan Dinsdale on June 25, 2019
Advertisement 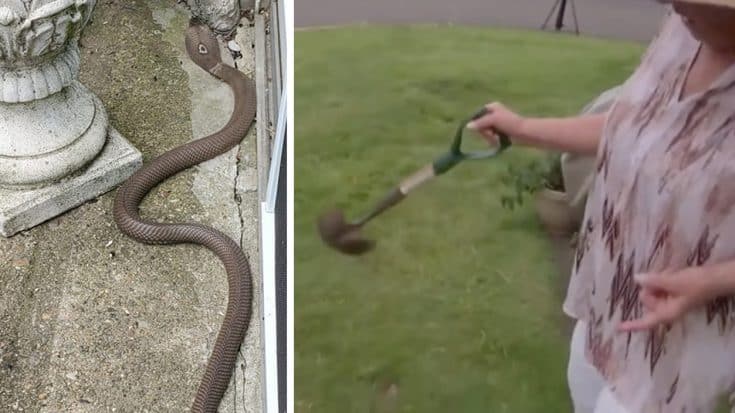 For The Record, Grandmas are Kick Butt – Do Not Mess With Grandma

Most people are terrified of snakes and tend to run the other direction. Kathy Kehoe is a 73-year-old grandma from Falls Township, Pennsylvania and is definitely not one of those people. On Monday, June 24th, Kathy proved how fearless she is by killing a 4.5 foot long monocled cobra!

Kathy was minding her own business when she heard blue jays squawking out in her yard. She went to see what all the fuss was about and saw a snake slithering by her patio. Kathy said that when she first saw the snake that she let a swear word slip out because she knew immediately it was a cobra. She was able to snap a few photos of the snake before going to grab a short spade shovel to handle business.

Here is the cobra moments before she took matters in her own hands. ?? > ? pic.twitter.com/nPYypXC9Cz

The snake started to make its way across the yard and that’s where Kathy Kehoe confronted the venomous reptile. She was worried for the children and other people in the area and knew there was little time to call authorities before it got away. As the snake was slithering away from her she tapped the cobra on the tail with the shovel to slow it down.  She then sent the shovel through the snakes head delivering a fatal blow. She is incredibly fortunate that she did not miss with the short 2 foot shovel!

“He went this way. I stalked him and when he got over to here, I tapped his tail. He went up and that’s when I did the deed and held him there,” Kathy said.

Ms. Kehoe believes that the reptile has been around for months.

Cobras are indigenous to Asia and Kathy was definitely surprised to see one in her yard. Last March authorities removed 25 venomous snakes from a neighboring complex, 12 of which were cobras. Authorities have not confirmed if in fact the snake is related to that incident but it is a suspicious coincidence.

Kathy is incredibly lucky that she was able to kill the venomous reptile without getting bit. A cobra bite can kill you within hours if you do not get medical attention and receive an anti-venom. Most snake bites occur when trying to attack or capture a snake.

Animal control recommends that if you encounter a venomous snake to distance yourself, watch where it goes, and to call authorities.

Either way Kathy Kehoe is one bada– grandma. Her neighbors all thank her for helping protect the neighborhood. Awesome job Kathy!