8 Country Artists Who Have Performed With Their Kids

By Miranda Raye on January 18, 2022
Advertisement 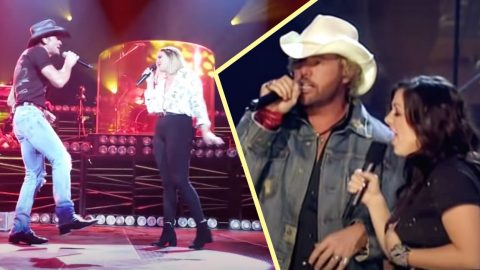 It’s not uncommon for country singers’ kids to follow in their musical footsteps. Wanting to foster that talent, country artists will sometimes ask their kids to sing a duet with them.

Here, we’ve compiled eight of our favorite collaborations between country singers and their children. Keep in mind, we haven’t included any duets by an established family singing group or duo, such as The Judds or The Carter Family.

“Mockingbird” was originally recorded by Inez & Charlie Foxx in 1963. Toby Keith and his daughter, Krystal, revived the song 41 years later.

Toby and Krystal released their version of “Mockingbird” on Toby’s Greatest Hits 2 album. Their duet ended up peaking at the 27th spot on the Hot Country Songs chart.

Travis released their version of the song on his album The Calm After…, which was a re-release of his 2003 album The Storm. Tyler Reese was only 15 years old when she recorded the song with her dad.

As Tim McGraw and Faith Hill‘s eldest daughter, Gracie McGraw grew up surrounded by music. And like her parents, she is incredibly talented.

Tim had Gracie join him on a song titled “Here Tonight,” which was featured on his 2015 album Damn Country Music. Tim also brought a then 18-year-old Gracie on stage to sing “Here Tonight” with him at one of his concerts.

Carrie Underwood made her 2020 Christmas album extra personal by having her eldest son, Isaiah, record “The Little Drummer Boy” with her. He was only five years old!

While speaking on The Drew Barrymore Show, Carrie said she thinks her son has a knack for singing:

“You can kind of tell when someone has pitch,” she said. “He can sing along with me and you can tell what song he’s singing if he’s just singing on his own, because he’s singing the correct notes.”

Only time will tell if Isaiah becomes a singer just like his mama!

Willie Nelson has raised a whole bunch of musically inclined kids! Most recently, he released an album in 2021 titled The Willie Nelson Family which features his sons Lukas and Micah, his daughters Paula and Amy, and his sister Bobbie.

We are especially fond of Willie’s performances with Lukas as Micah, such as the one captured in the above video when they sang “Blue Eyes Crying in the Rain.”

Gary & Brittany LeVox – “While I Wait”

Rascal Flatts‘ Gary LeVox released a solo gospel EP in 2021 titled One On One. His daughter, Brittany, was 20 years old at the time, and was the featured vocalist on one track.

You can hear Brittany sing along with her father on the song “While I Wait.” The duo’s official lyric video for the song has generated over 255,000 views so far.

Lily Pearl Black is the daughter of Clint Black and Lisa Hartman Black. Imagine having two country music stars as your parents!

When Clint released his Christmas Collection album in 2018, his daughter joined him on a song titled “Magical Christmas.” Lily Pearl has since made her Grand Ole Opry debut and has performed with her parents on tour.

All of Conway Twitty‘s children showed an interest in performing country music. His daughter, Joni Lee, was still a teenager when he tricked her into recording a song with him titled “Don’t Cry, Joni.”

Conway told Joni she was cutting the demo, and he was going to have a professional singer record her part for the finished version. But Conway never replaced Joni’s voice. As Joni told Billboard, when her dad released “Don’t Cry, Joni,” she was surprised to hear he left her on the track. The song ended up becoming a huge hit!

Circling back to another father-daughter duo we mentioned earlier…Travis and Tyler Reese Tritt filmed themselves singing a cover of “Don’t Cry, Joni” in 2019. Watch them perform the song below.

We love listening to duets between country artists and their kids!