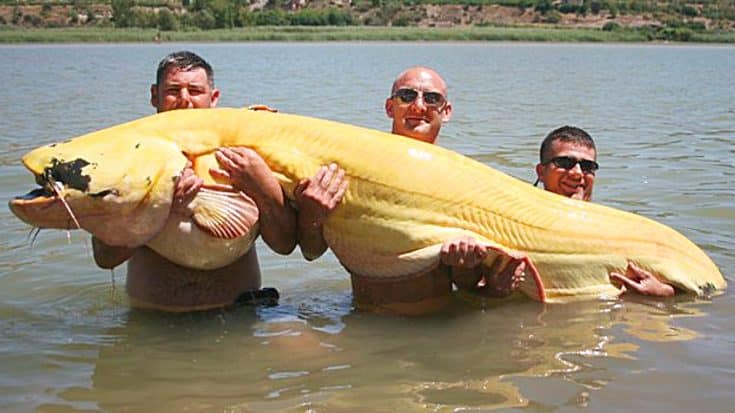 Chris Grimmer was taking a fishing trip to Spain with a few buddies, simply just looking to have a relaxing time when he unexpectedly reeled in an albino catfish so large it set a world record.

The massive fish stretched out 8 feet long, weighed 194 pounds and took three men to lift up out of the water of River Ebro. See the image above of Chris struggling to hold up just the fish’s head.

“It took my reel and stripped it and it was then that I knew it was a big one,” Chris said. “It took me ages to bring it in, it was like trying to reel in a bus.”

They were on a fishing tour and their tour guide, Ashley Scott, left them at the river to fish while he went to buy some food for the group. When Ashley returned he discovered Chris was in the process of reeling in a world record sized catfish.

“We know what the records are for catfish so we realized straight away that it was a record.” Ashley said. “There was mayhem on the bank with people cheering and clapping. We had a bottle of champagne to celebrate it and Chris poured a drop into the river for the fish.”

According to Chris, it took him 30 minutes to reel in the beast and was the largest albino catfish ever caught in River Ebro, beating a lady who held the record from a previous year.

They measured it, weighed it and released it back into the river right after they took a bunch of pictures with it of course. Chris currently holds the record for catching the biggest albino catfish ever caught in River Ebro.

This is definitely one beautiful creature of the river and a fishing trip Chris will never forget!