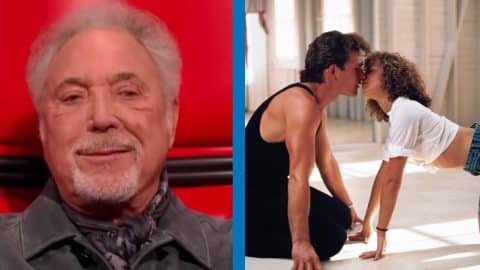 The Voice UK was on a break from auditions when the show’s virtual audience inspired coach, Sir Tom Jones, to sing for everyone.

Tom’s fellow judges looked on in amazement as the singer belted out the lyrics to the 1961 hit, “Cry To Me” by Solomon Burke. The song was initially featured in the iconic movie Dirty Dancing. At its time of release, “Cry To Me” peaked at No. 5 on the Billboard and spent twelve weeks on the charts.

You can listen to Burke’s version of the song in the clip from Dirty Dancing below.

Olly Murs, Will.i.am, and newcomer Anne-Marie exchanged glances as Tom’s rendition of “Cry To Me” captivated the audience. Several viral listeners danced or swayed along to the tune of Tom’s powerful performance.

Tom is a Welsh singer whose career exploded after a string of top ten hits in the ’60s. Tom recorded the theme song for the James Bond movie Thunderball, and he is the artist behind classics such as “She’s A Lady” and “Green Green Grass Of Home.”

How do you think Tom’s cover compares to the original song? Watch Tom’s rendition of “Cry To Me” in the next video!