By Miranda Raye on October 7, 2019
Advertisement 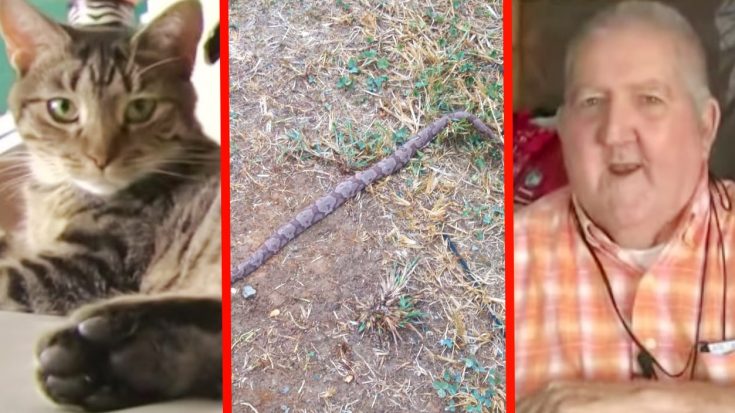 81-year-old Jimmie Nelson was sleeping in his home in Claiborne County, Tennessee last week when he heard a noise in the middle of the night. Jimmie did not get up to investigate, since he assumed the noise was just his adopted shelter cat, Shelly, playing or chasing after a mouse.

But two days later, Jimmie discovered that Shelly hadn’t been playing that night. She was protecting him from a dangerous intruder.

That intruder was a copperhead snake, a venomous type of snake that can be found throughout the Eastern U.S., including Tennessee.

According to Snake Removal Nationwide Service, copperhead bites “are rarely the cause of snake bite fatalities.” However, the site notes that when it does bite, the snake’s venom, “will cause severe damage to the local tissue and can pave the road for serious, secondary infection.”

Considering Jimmie’s age and the fact that he is a stroke victim, the snake’s bite could have had a worse effect on him than a younger person of better health.

Thankfully, the snake never came close to Jimmie, since Shelly managed to kill it before it got to him. Jimmie discovered the snake’s body two days after he heard the noise in the middle of the night.

“I got out and looked under the table and there laid a snake,” he told WBIR-TV on Thursday (October 3).

Shelly the shelter cat quickly earned her keep when she came out of a fight with a copperhead snake victorious. https://t.co/BHmC0Bmjng

It seems that Shelly had drug the snake out of hiding to show Jimmie her handiwork. His daughter, Teresa Seals, wrote on Facebook that “the snake had what appeared claw marks on its head and neck.”

Teresa concluded that Shelly had killed the snake, and the noise her father heard the other night was Shelly battling with the slithery creature.

“So, the cat apparently killed the snake and brought it out to show dad his prize. now, Shelly is a true hero,” Teresa wrote.

Teresa said that her dad had adopted Shelly from the shelter “for companionship.” But he ended up adopting a lifesaver!

You can hear more about Shelly’s heroic act by watching the news report below.