By Manly Bryant on September 30, 2019
Advertisement 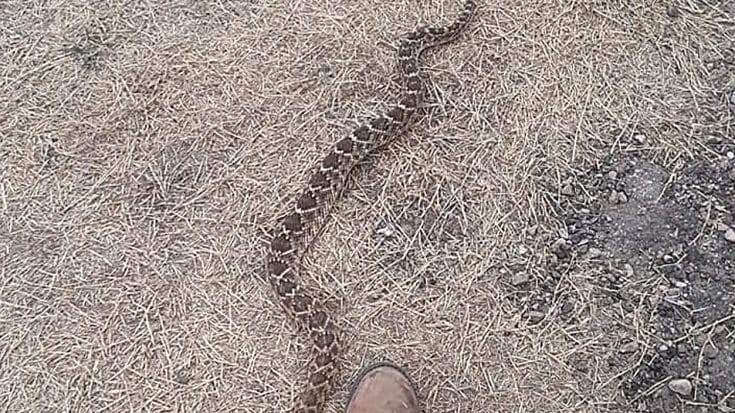 Granny Walks Up On A Rattlesnake

An 85-year-old lady named Joyce Milligan was walking in her backyard when she was startled by a highly-venomous 5-foot rattlesnake.

Posted by Texas Department of Transportation on Thursday, September 26, 2019

The snake scared her so badly she fell to the ground and apparently wasn’t able to get back up. She sat on the ground next to the coiled-up snake for a frightening 2 hours.

Fortunately for her, two Texas Department of Transportation workers, Dwane Morton and David Price, were walking along the road picking up trash and noticed her laying in the backyard.

They went over to help her up and that’s when they saw the deadly creature just a few feet away. The men killed the snake and helped Joyce back up to her feet. After checking to make sure she wasn’t injured they walked her back into her home.

Once the guys told their co-workers, the department decided to post the story to Facebook with two pictures of the snake. The guys were praised for rescuing the lady and received “thank yous” from people in the comments.

Posted by Texas Department of Transportation on Thursday, September 26, 2019

Snakebite Statistics In The U.S.

In the United States, around 7000 people are bitten by snakes every year. One out of every five-hundred bites are venomous snakebites and in Texas alone, 1-2 people die per year from getting bit. Fortunately though, half of all venomous snakebites are “dry” bites. Which means the snake does not eject venom from its fangs when it bites.

No interview was recorded from the lady but for your entertainment, we have a video below showing a guy taking a bath with 120 deadly rattlesnakes.