By Miranda Raye on December 28, 2018
Advertisement 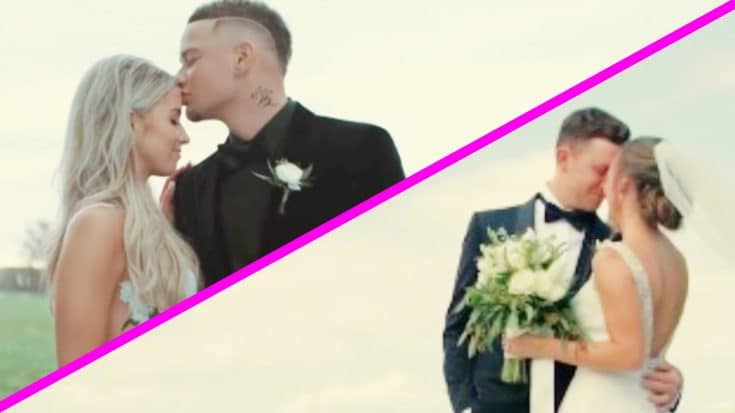 Country Stars Were Feeling The Love This Year

Love was in the air in the country music world in 2018! So many stars said “I do” this year that you couldn’t even begin to count them all.

The singers’ ceremonies enchanted country fans as they flipped through one gorgeous wedding photo after the next. Many artists even captured their nuptials in music videos accompanied by love songs.

As you would imagine, these clips were huge hits.

As 2018 comes to a close, we’d like to celebrate the year by looking back on nine of its most buzzed-about marriages. You’re sure to be left feeling the love once you look back on these artists’ heartwarming wedding photos!

Colton Swon of The Swon Brothers and Caroline Glaser met way back in 2013 when they were both contestants on The Voice. Their relationship soon turned romantic, and they stuck together as they continued to pursue their careers.

So you can imagine how overjoyed fans were when the duo announced their engagement in February 2017. Colton shared the happy news along with a photo of Caroline’s ring, writing, “I’ve been dreaming her up my whole life and she’s so much more than what my simple mind could come up with.”

She said YES! I get to marry my best friend y'all! I've been dreaming her up my whole life and she's so much more than what my simple mind could come up with.Thank you Lord for this amazing girl and these two amazing families. Forever ain't long enough.

After a year-long engagement, the longtime loves finally tied the knot this year on March 17. They were married at Nashville’s Houston Station, with special guests including Colton’s good friend Carrie Underwood and his brother, duo partner, and best man Zach Swon.

Following their nuptials, Colton shared a single photo from the special day without any caption. He honestly didn’t need to say anything at all, because the picture clearly spoke for itself!

Years ago, singers Maren Morris and Ryan Hurd met while they were both songwriters trying to make their way in the country music world. A romance eventually sparked between the two, and they announced their engagement in July 2017.

Maren shared a photo of her ring to announce the happy news, simply captioning her post with a “Yes” and a diamond ring emoji.

The couple’s wedding was highly anticipated, and it was one of the first to come in 2018. They married on March 24 during a private ceremony that took place in Nashville.

Maren sported a short wedding dress with a long trail, something that she had custom-made after being inspired by her mother’s own wedding gown. The dress was showcased in the first photo Maren shared from the ceremony, which she captioned with “My last turn home.”

That caption holds special meaning, as it references a song Hurd co-wrote for Tim McGraw. It was the perfect accompaniment to the perfect wedding photo.

While he is best known as one of the stars of the HGTV series Property Brothers, Drew Scott is also a country singer. So is his twin brother, Jonathan.

In 2016, both HGTV and country music fans were delighted when Drew joyfully announced that he was engaged to his girlfriend of six years, Linda Phan. “From the first moment I met Linda, back in 2010, I knew she was special,” Drew wrote on Instagram.

From the first moment I met Linda, back in 2010, I knew she was special. And last night I became the luckiest man on the planet when she said #ido ❤️

Drew finally married his special someone in May of this year. The two were wed during an outdoor ceremony in Italy, with Linda wearing a gorgeous gown accented with floral details.

As for Drew, he wore a special kilt made out of Scott tartan. How fitting!

The photos from the couple’s wedding day enchanted people all around the world, with their first public photo being one of the most stunning. “This is love,” Drew wrote to accompany the gorgeous snapshot.

Scotty McCreery and his longtime love, Gabi Dugal, go back further than any other couple in this list. The two knew each other in elementary school, and Gabi even filled her notebook with the name “Mrs. Gabi McCreery” as a child.

The couple announced their engagement in September 2017. Scotty popped the question after the two completed one of their favorite hikes in the mountains of North Carolina.

The same state’s mountains once again served as a backdrop for another special day in the lovebirds’ lives…their wedding day. They were married on June 16, and soon shared a series of breathtaking photos from their unforgettable day.

It’s so hard to chose a favorite photo from their wedding, since all of them are gorgeous. But one of our all-time favorites has to be the one below, in which the couple is just inches away from sharing a kiss.

You can feel the love and joy between them just from looking at this beautiful picture!

Just 11 weeks after Josh Abbott and his girlfriend, Taylor Parnell, welcomed their baby girl Emery in July 2017, he enlisted the little one’s help in orchestrating an unforgettable proposal.

The Josh Abbott Band frontman had his baby girl dressed in an adorable onesie that read “Mommy will you marry daddy?” in pink letters and set a jaw-dropping diamond ring next to her. Of course, Taylor said yes!

Just a little under a year later, Josh and Taylor said “I do” on July 8 in Austin, Texas. Then 14-month-old Emery was also included in the wedding as the flower girl.

The first photo Josh shared from their special day also features their baby girl. The precious snapshot shows Josh and Taylor walking arm in arm down the aisle at the end of the ceremony, while Josh holds Emery with his other arm and smiles at the wedding guests.

Now that’s a picture-perfect moment if we’ve ever seen one!

“Strawberry Wine” singer Deana Carter fell head over heels in love in 2017 when she met a man named Jim McPhail through a group of friends.

It didn’t take long for the two to start up a romance, and the many photos they took together made it clear they were smitten with each other.

LA has so many wonderful spots & today’s event hosted by @thefrontyardla benefits the @YMCA! Gimping thru on the knee brace & feeling SO blessed! THANK YOU for all your prayers & love! Cheers!! 🎉

The couple surprised everyone following the Fourth of July when they married during a private ceremony in Rosemary Beach, Florida at the Pearl Hotel.

Deana managed to keep the news of her marriage secret for over a week before she finally shared the joyous news and a few photos. Long after the wedding bells had finished ringing, Deana said she was still over the moon about marrying her true love.

“Still floating from becoming the Mrs.,” she wrote in her first social media post acknowledging her marriage.

Still floating from becoming the Mrs.! Thanks @people for sharing our love story! 😉

In August 2017, Kane Brown delighted a crowd who gathered at one of his shows in Philadelphia when he announced his engagement to girlfriend Katelyn Jae. Since Katelyn is from Philadelphia, Kane felt that his show in the city was the perfect place to reveal his happy news.

“I just got engaged to a girl from Philadelphia two days ago,” he said. “This is my first time making this announcement, but we’re in Philly, so I thought I had to go ahead and make the announcement, so thank you Philadelphia.”

@kanebrown announcing his engagement. I'm so happy for him. Congrats!! 💍💙 pic.twitter.com/zgu3OLoxxP

At long last, Kane and his “girl from Philadelphia” tied the knot on October 12 during a ceremony at the Mint Springs Farm outside of Nashville.

“It’s not too rural but has so many elements of nature — a huge lake, rolling hills, trees. It’s just beautiful out there,” the couple said while speaking about their wedding with People.

“Beautiful” is the perfect word to describe the duo’s special day and the photos that were taken during it. The first wedding photo Kane shared surely made more than a few fans’ jaws drop when they saw it.

Now that right there is what love looks like!

In 2016, news broke that Nashville actor and country singer Chris Carmack was engaged to girlfriend Erin Slaver. Chris’ fans likely recognized her from Nashville as well, since she once played a backup singer to main character Juliette Barnes.

Erin shared the exciting news of their engagement on Instagram, along with a photo that offered a peek at her dazzling new ring.

“Sparkling drinks and fingers” she wrote.

After being engaged for well over two years, the couple finally exchanged vows when they married on October 19. Like Kane and Katelyn, the two were married on the gorgeous grounds of the Mint Springs Farm in Tennessee.

Chris was happy to share a first look at his big day, and the photo he chose was a stunner. Everything from the couple’s attire to the natural beauty of the location combined to make one outstanding wedding portrait.

“Mercy” singer Brett Young and girlfriend Taylor Mills dated for six years before splitting up after he moved to Nashville. The two eventually reconnected, and their romance bloomed again.

After all this time, Brett knew that he was meant to spend the rest of his life with Taylor, and asked her to marry him in February of this year.

The duo had the shortest engagement of any couple on this list, as they were married on November 3 in Palm Desert, California. Appropriately, they shared their first dance to a special version of the classic hit “Forever Young.”

Brett referenced the song in a hashtag when he shared his first wedding photo on social media a few days after the ceremony. Other than including a loving emoji, the ForeverYoung hashtag was all that Brett wrote.

But just as we’ve seen with the other couples on this list, he didn’t really need to say anything at all. The smiles on his and Taylor’s faces said everything anyone needs to know. They’re in love and want the world to know it!

More country music weddings are sure to follow in 2019, as many big-name stars have announced engagements this year. Just a few of the many country singers set to stride down the aisle include Luke Combs, Maddie & Tae‘s Maddie Marlow, and Lauren Alaina.

If their nuptials are anything like the stars who wed in 2018, then y’all are sure to be blown away by their wedding photos and videos as well.

Being yours forever has a nice “RING” to it. #HoppilyEverHopkins @_alex_hopkins WE ARE ENGAGED. EEEK. 💍❤️

But in the meantime, spend just a little longer reliving the love that was shared this year by watching one of the couples on this list share their special day in an equally special music video.

That couple is Kane and Katelyn, whose wedding footage served as a lovely accompaniment to Kane’s song, “Good As You.” He wrote the song about Katelyn, and you can feel the love he has for her in every word he sings.

Congratulations to all of the country stars and their special someones who got married this year!