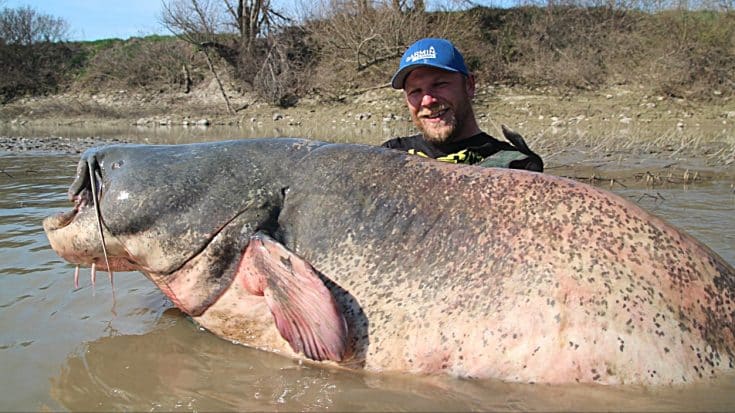 Benjamin Gründer, a 37-year-old professional fisherman from River Po in Italy, hooked one of the largest freshwater fish on the planet, a 9-foot-long catfish setting a new world record.

People travel to River Po all the time to fish for the legendary catfish in the river and people often catch these massive creatures but never have they caught one as long as this one.

The mega-fish was never officially weighed because they didn’t have scales on-site, but the unofficial estimate for the catfish was 284 pounds. It stretched a whopping 8.8 feet long and had massive fins that were bigger than Benjamin’s hand.

Benjamin said when he first felt his hook caught on something he figured it was a tree root. However, after his fishing pole started moving around, he realized he had a big fish on the line.

He struggled for over 45 minutes trying to reel in the monster and when it finally reached the surface of the water it was impressively longer than his boat.

It was at this moment he realized he had caught a record-breaking catfish.

Benjamin and his friends posed for pictures showing how gigantic it was before they released it back into the river. Once he posted the pictures on Facebook, the word got out about his catch and major news sources started spreading the story.

Congratulations Benjamin Gründer, may your story live on forever!