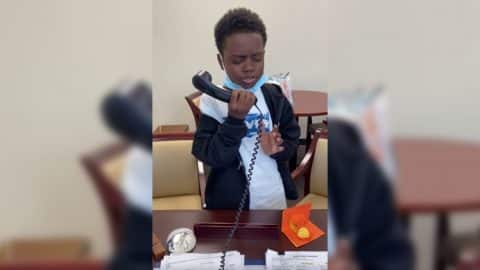 Principle Dunn from Bates Elementary School in Louisville, Kentucky filmed a video of 9-year-old DCorey Johnson singing the National Anthem on the school’s intercom and it’s quite impressive.

Video showed DCorey grabbing the intercom right after principal Dunn was finished with her first morning announcements and he stunned the staff and students as he sang “The Star-Spangled Banner.”

WHAS11 reported Principle Dunn saying afer his performance, “I really didn’t know what to expect and when he was finished I couldn’t finish the announcements.”

Lost for words, she later shared the video to the school’s official Facebook page so everyone could see his skills. She jokingly wrote it’s not America’s Got Talent, but it’s “Bates Got Talent!”

The third-grader’s mother said he has been singing all his life and joined the church choir when he was just four years old. After his incredible performance on the intercom, he’s now been asked to sing at other school functions and events.

“I never got to sing the National Anthem before but now they want me to sing at a baseball [game] and football [game] and at a school and everywhere, and I’m like, ‘Oh, my Jesus!’” DCorey said.

WHAS11 shared raw footage of him practicing songs before performing the “The Star-Spangled Banner” for the school. You can click below to watch that video.