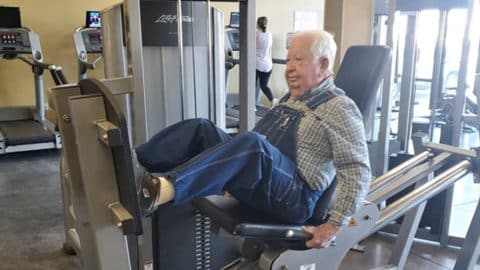 One year ago, at the age of 90, Lloyd Black walked into Anytime Fitness in his hometown of Semmes, Alabama, donning his denim overalls and ready to work out.

Black decided to start working out when he started having trouble completing everyday tasks like housework and mowing, and  he hoped that a new exercise regimen would help him get stronger and relieve some of his aches and pains. Slowly, but surely, Lloyd got stronger and inspired a whole gym in the process.

Black started his workout routine with a simple 10 minute walk on the treadmill that left him breathless and exhausted. Now he can easily walk for 30 minutes and has even started weight-lifting. According to Ashley Seaman, manager of Anytime Fitness, Black does leg presses and uses some of the upper arm machines.

“He’s been showing so much progress and over the past year he’s been coming faithfully three times a week or if not more like every other day,” Seaman told TODAY.

While Black’s determination is praise-worthy and has brought him a lot of attention, so has his workout attire. “People notice his overalls,” Seaman said. During the winter, Lloyd exercises wearing his denim overalls. In the summer, he switches to work coveralls.

“The reason I wear them is very simple: I don’t have much hips,” Black joked., a retired principal from Semmes, joked to TODAY. “If I get too active, I have trouble keeping my pants up.”

Although Black has been totally devoted to a healthier way of life, he admits that he doesn’t exactly love it.

“The fitness center is something you don’t necessarily enjoy, but you enjoy having done it,” the retired school principle said. “You realize how much it helps. That is what I get out of it.”

Black’s dedication earned him Member of the Month honors at his local Anytime Fitness. The award has made Black an internet sensation and an inspiration to many.

We wanted to take a moment to congratulate our newest member of the month…Mr.Lloyd Black! Mr. Black became a part of…

91-year-old takes up working out

You know that I love feel-good stories, and this is as good as it gets!If you have never heard of a man named Lloyd Black, you have now. Lloyd is from the Semmes, AL area, and he's quickly becoming the main attraction at Anytime Fitness in Semmes. You see, Lloyd has made a commitment to working out. So three days a week, Lloyd drives himself over to the gym and gets down to business. Did I mention that Lloyd is 91 years old? And did I mention that Lloyd's first choice of workout clothes are his overalls?While it's certainly an unusual sight, Lloyd is serious about his workouts, as he walks about 30 minutes on the treadmill and enjoys doing leg presses and arm exercises.Mr. Black has quite a story to go with his new celebrity: He joined the Air Force a year out of high school and married his beloved girlfriend named "Bunny". After 48 years of marriage, Bunny passed- years later he found love again, and has now been married to Mary for nearly 11 years.Lloyd retired some 30 years ago, but spent years as a high school history teacher- he was also a principal at shools such as BC Rain, Davidson and Baker.These days, Mr. Black enjoys cutting his own lawn, gardening, puzzles, photography and wood working.Now you can add working out to Mr. Black's repertoire, where he enjoys chatting with gym owner Ashley Seaman and the others at the facility who are hard at work,So if you are in the Semmes area and run across a 91-year-old in overalls who looks buffed up, be sure to say hello to Lloyd Black. And remind him that his hard work is paying off.#WhichWayToTheBeach?Thanks to Ashley Seaman for the video