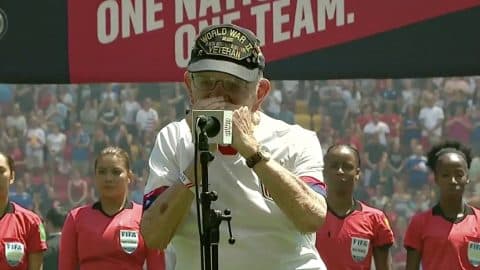 We’ve all heard “The Star-Spangled Banner” dozens of times in our lifetime, but we doubt you’ve ever heard anything quite as moving as the anthem performed on the harmonica.

Prior to a U.S. Soccer Women’s National Team match on Sunday (May 26, 2019) at Red Bull Arena in Harrison, New Jersey, 96-year-old Pete DuPre was wheeled onto the field where a microphone awaited him. He rose from his wheelchair and took his place, harmonica in hand, to perform the national anthem. The crowd instantly went silent as DuPre began to play the familiar melody.

As the WWII veteran, affectionately known as Harmonica Pete, concluded his performance, the crowd erupted. DuPre returned to his wheelchair and waved to the crowd as he exited.

Harmonica Pete’s timely performance came one day before Memorial Day, the national holiday that allows Americans to stop and remember those who have given the ultimate sacrifice for our freedom. According to NJ.com DuPre served as a medic in the 114th General Hospital Unit in Kidderminster, England. His parents served on the Western Front during World War I.

DuPre met members of the US Soccer Women’s National Team at Omaha Beach in France, the site of D-Day. The fateful meeting led to Pete’s performance of the anthem. The team took to Twitter following Sunday’s game to share their love for Pete.

we love Pete so much. pic.twitter.com/Lxd3Xqo9eu

WWII vet Pete Dupre just delivered the best rendition of the Star Spangled Banner I’ve ever heard — on the harmonica. #USAvMEX just kicked off for the last game of the #USWNT’s send-off series. pic.twitter.com/PddPp8ra2R

Wow…stirring in its simplicity and sense of quiet. Did anyone see 96yo WWII vet Pete DuPree deliver a moving National Anthem on harmonica on @foxandfriends from the @USWNT match? #MemorialDayWeekend pic.twitter.com/3kiV8rMC5N

96 year old, Pete DuPre, #WWII vet just played the National Anthem on his harmonica. It was the most beautiful thing I’ve seen in a long time. Go Pete! Go #USWNT!!

I’m all for the stadium singing the National Anthem, but listening to a WWII veteran play it on the harmonica has me 😢. Well done Pete Dupre and @USWNT 🇺🇸 🇺🇸🇺🇸🇺🇸🇺🇸 God bless the families who had to live on after their family member gave the ultimate sacrifice. #USAvMEX

Hear Pete DuPre perform the national anthem on the harmonica in the video below. Thank you for your service, Mr. DuPre.