‘A Beautiful Day In The Neighborhood’ Trailer Shows Tom Hanks As Mr. Rogers 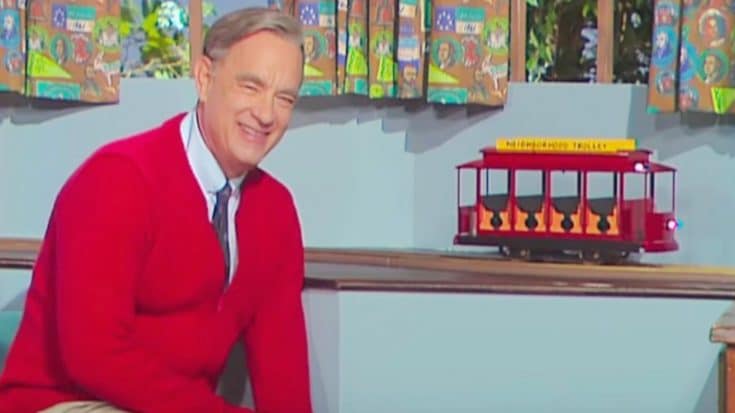 Tom Hanks has taken on a number of noteworthy roles throughout the course of his career. While he has played a number of fictional characters, he is also well-known for portraying real-life people.

Just a few iconic people Hanks has portrayed include Captain Chesley “Sully” Sullenberger and Walt Disney. He’ll soon add another noteworthy name to that list, as he is set to portray Elvis Presley‘s infamous manager “Colonel” Tom Parker in an upcoming film.

But before that, Hanks will be seen playing yet another real-life person, and that person is none other than Fred Rogers. Or as you know him, Mr. Rogers.

Some time ago, it was announced that Hanks would be playing the beloved children’s television show star and puppeteer in a film titled A Beautiful Day in the Neighborhood. The film is not your traditional biopic, but rather, will explore the friendship Mr. Rogers shared with a journalist named Tom Junod.

The first image from the set emerged in September 2018, and another followed in March 2019. The two pictures show the uncanny resemblance between Hanks and Mr. Rogers.

The first photo of #TomHanks as Mr. Rogers was released today and we can't stop smiling! ? |?: Sony Pictures

To celebrate what would’ve been Mister Roger’s 91st birthday today, Sony released this new image of their upcoming biopic ”A Beautiful Day In The Neighborhood” starring @tomhanks. Let the waterworks begin ???

Now, for the first time ever, you can see Hanks acting as Mr. Rogers in the newly released trailer for the film. It made its grand debut on July 22, and is simply delightful to watch.

If you grew up watching Mr. Rogers on TV (or watched him with your kids), this trailer is sure to bring back fond memories. It shows Hanks singing Rogers’ famous song “Won’t You Be My Neighbor?” as he changes into his sweater and sneakers just like Rogers did on his show.

Based on this trailer, we have a feeling this new film will be an emotional one. In fact, just the trailer alone may end up bringing tears to your eyes. Go ahead and watch it below.

A Beautiful Day in the Neighborhood is set for release in November 2019, so mark your calendars!