A “Kentucky Fried Crystal” Discovered By A Student in Indiana 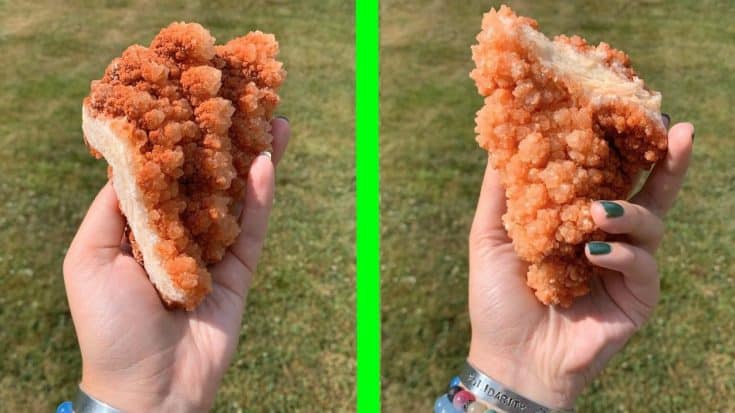 Amelia Rude, a 20-year old student in Indiana, runs a bracelet business with her boyfriend. She is a crystal collector with 700 items in her collection. When she bought a “fried tender” looking crystal from her friend, she didn’t imagine it would go so viral on social media.

Good morning from me & my chicken tender crystal who is looking particularly edible today. I posted this as a joke on r/forbiddensnacks, and it’s really taken off ? UNILAD released an article about it today (link in bio). He is currently not for sale!

Indeed, after posting a picture of the crystal on the r/forbiddensnacks subreddit, several people commented expressing how amazed they are by this “friend tender” looking crystal.

Right after Amelia posted the picture of the crystal, a Twitter account @fartpowder shared her crystal picture. “CRYSTAL THAT LOOKS LIKE CHICKEN TENDER ALERT,” it wrote, gathering more than 52,000 retweets and 281,700 likes, at the time of writing.

“I knew it played a pretty convincing fried chicken, so I expected it might get a thousand upvotes or so, but I was surprised when it took off the way that it did,” she told UNILAD.

In less than two days, the crystal pictures were all over Facebook, Instagram, and other media outlets.

Amelia said, “There are two varieties: calcite and aragonite. A simple vinegar or HCl test would determine which one it is, but I’m hesitant to erode its natural crispy beauty.”

Despite receiving a few inquiries about selling her crystal, she has had “no serious offers” so far.