Mystery Solved: How Flying Snakes Glide Through The Air 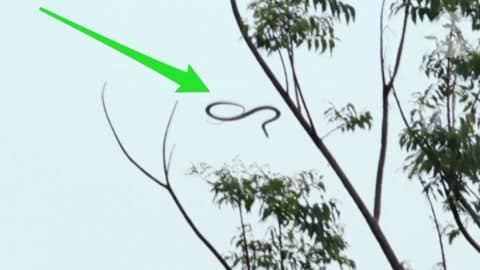 A professor of biomedical engineering and mechanics at Virginia Tech, Dr. Jack Socha and his colleagues published a study on Monday, June 29th, 2020, in Nature Physics on how flying snakes glide. Their discovery about how this reptile swims through the air is unparalleled.

Snakes are the least obvious animals to fly in the air. Generally, it is thought that these snakes fly in the air to avoid predators. When flying snakes glide through the air, they flatten their bodies to provide lift.

However, a question arose among scientists: why does the flying snake undulate when gliding through the air? Is it because this is what snakes do or is it because undulation is an answer to physical underlying functions to enable the snake to glide in the air?

Isaac Yeaton, a research engineer at the Johns Hopkins University Applied Physics Laboratory and part of the researchers’ group, helped set-up an experiment to measure flying snake undulation in precise detail. To be able to do this, the team of researchers used a motion-capture system, like the one used in Hollywood movies, to track markers put on the snake body.

During the experiment, once the snake did take to the air, the pieces of tape on its back provided data to the motion cameras allowing the team of researchers to create a 3D model of the snake’s movements. The model shows that the undulations contain both vertical and horizontal waves. These waves flow proportionally, with the vertical waves twice the frequency of the horizontal waves.

This discovery is of high interest to scientists as side-to-side undulation mechanism’s can be translated to snake robots to enable them to move through rough environments or sand.

This study solved a new mystery about flying snakes!

Watch the video below to have more details about the study and how flying snakes glide.