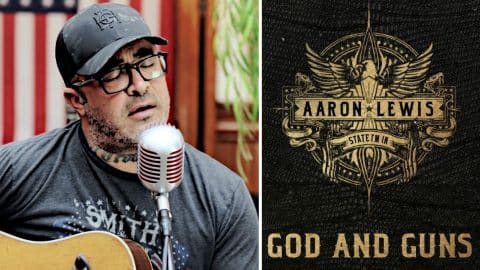 If there is one thing we know about Aaron Lewis, is that he’s passionate about what he believes in.

He made that known when he stopped by Country Rebel Headquarters to perform a few songs, one of which was his hard-hitting song “God And Guns.”

“God And Guns” is included on Lewis’ solo album titled State I’m In, which was released on April 12, 2019. Lewis served as the sole writer or co-writer on six of the album’s ten tracks. Produced by famed producer Buddy Cannon, the album also features collaborations from Dan Tyminski, Keith Gattis, Ira Dean, Chris Wallin, and even the late Keith Whitley.

Check out the track listing below.

The “Sinner” singer debuted the song at a Bloomington, Illinois concert in May 2018, just a few days after writing it.

“Alright, this is the first, very, very first time I’m attempting to play this next song. I wrote this song on Monday on the back deck of [popular bar] Losers in Nashville,” he told the crowd before playing the musical intro to “God And Guns.”

As you can expect, he garnered many cheers, hoots, and hollers after singing the very first chorus’s powerful lyrics:

“So say what you want to ’bout the things I hold true
And the fabric that makes up this red, white, and blue
‘Cause I’ll fight for my country ’til the day that I’m done
I’ve still got my God and I’ve still got my gun”

During his session at Country Rebel, like his very first live performance of the song, Lewis stripped it way back and even slowed it down a bit from the studio version.

He performed it with an incredible passion that makes you know he whole-heartedly believes every word he sings, especially this verse:

“I was raised up to stand up for what I thought was right
A tooth for a tooth and an eye for an eye
And do unto others as you’d be done to
If you do me wrong, mister, got it comin’ to you”

Watch his Country Rebel HQ session below, and click here to order State I’m In.