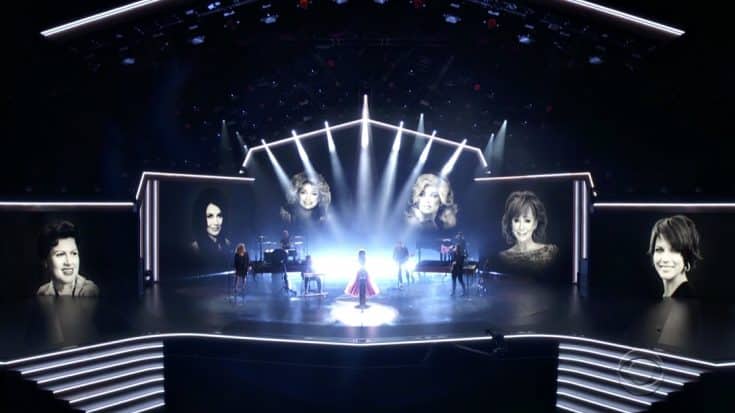 Before there was Carrie Underwood there was Barbara, Dolly, Loretta, Patsy, Reba, Martina and many other women who paved the way for female country stars like Underwood. And tonight, during the 55th Academy of Country Music Awards show, the “Jesus, Take the Wheel” singer paid tribute to those trailblazers with a medley of some of their greatest hits.

For the first time in ACM Awards show history the event was held in Nashville instead of Las Vegas and was spread out over three of Music City’s most iconic venues: the Grand Ole Opry, the historic Ryman Auditorium, and the Bluebird Cafe. Carrie took the stage at the Grand Ole Opry for her medley, one similar to the tribute she performed at every stop of her Cry Pretty Tour. On tour, she enlisted the help of tour mates Runaway June and Maddie & Tae.

But, Wednesday night (September 16) she went at it alone as she performed portions of songs spanning from the 1960’s to the 90s. She kicked off the medley by singing the 1961 song “Crazy” by Patsy Cline, followed by Loretta Lynn’s “You Ain’t Woman Enough To Take My Man” from 1966, 1985’s hit “I Was Country When Country Wasn’t Cool” Barbara Mandrell, Dolly Parton’s “Why’d You Come In Here Lookin’ Like That” from 1989, Reba’s 1991 hit, “Night the Lights Went Out in Georgia,” and Martina McBride’s 1997 song “Broken Wing.”

The Women of Country theme has been a popular one in recent years. During the 2019 CMA Awards, Carrie Underwood teamed up with Dolly Parton and Reba McEntire for “Those Memories of You,” which Parton recorded on her Trios album with Linda Rondstadt and Emmylou Harris. They were then joined on stage by Jennifer Nettles and Little Big Town’s Karen Fairchild and Kimberly Schlapman who paid tribute to Loretta Lynn with “You’re Lookin’ At Country.” Parton accompanied The Highwomen on Tammy Wynette’s “Your Good Girl’s Gonna Go Bad.”