By Miranda Raye on October 9, 2018
Advertisement 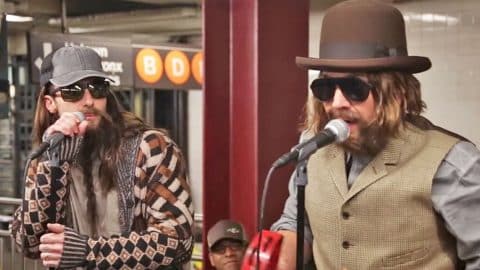 One group of unsuspecting commuters got quite the surprise while they were traveling through the New York subway system. That surprise came from the most unlikely of sources…a group of fake beard-wearing musicians.

It’s not at all unusual for New Yorkers to encounter buskers on their daily commute. It isn’t even that unusual for them to run into celebrities. But it’s practically unheard of for a famous singer to stop and sing a few songs for everyday people as they head off to work.

That makes sense, because a popular celebrity would be instantly recognized and cause a huge crowd to form around them. So if a celebrity would ever want to “busk” in a subway station, it would be best if they wore a disguise.

Treating Commuters To A Queen Classic

Since Fallon’s show is filmed in New York, he enjoys surprising commuters with a performance from a disguised singer. Voice coach and Maroon 5 frontman Adam Levine was one to join Fallon on such an adventure, and also brought his bandmate James Valentine.

The three guys looked unrecognizable in their wigs, hats, and fake beards. So no one had any clue who they were as they took to their “stage” and started to sing Queen‘s “Crazy Little Thing Called Love.”

The song was written by Queen’s lead vocalist Freddie Mercury in honor of Elvis Presley, who had passed away two years prior.

Even though no one recognized the guys, they could tell they had talent. Before long, a decent sized crowd started to gather to watch and film the “buskers” while they sang.

Everyone Was So Surprised

The crowd kept growing as Maroon 5 and Fallon finished singing “Crazy Little Thing Called Love.” So they saw that as the perfect opportunity to reveal their true identities, and the crowd freaked out when they did!

Once everyone knew who they were, the guys decided to entertain them with Maroon 5’s “Sugar.” The crowd doubled in size within seconds, and people could be seen singing and dancing along to the song.

It goes without saying that the Maroon 5 guys and Fallon definitely made those commuters’ days! Now you can brighten up your own day by watching their performance and surprise reveal in the video below!