By Miranda Raye on December 11, 2018
Advertisement 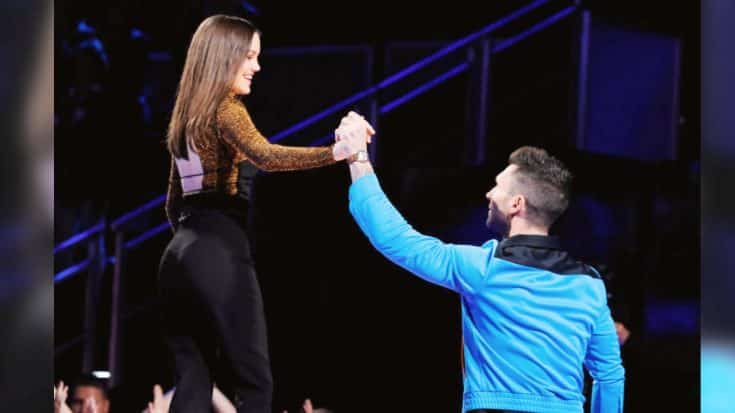 The Biggest Voice Scandal Ever

Every time The Voice has to eliminate a contestant, you always have a group of viewers saddened by their departure. But the show’s most recent eliminations have viewers feeling far more than sad…they’re furious.

In case you missed it, during the Top 10 results show last week (December 4), Team Blake‘s Dave Fenley and Team Adam‘s DeAndre Nico and Reagan Strange were in the bottom three. As contestants typically do in such a situation, Fenley and Nico performed during an Instant Save round for fans’ live votes.

But Strange was not feeling well, and as a result, was unable to perform. Despite this, the show’s rules state that even though she couldn’t sing in the Instant Save, Strange was still eligible to vote for.

Only one of the three singers was given the chance to move on, since the show was trimming the field of contestants to the Top 8.

And the artist who won that chance in the Instant Save was Strange.

Many outraged fans turned on Strange’s coach, Adam Levine, who prior to the final votes being tallied, made a lengthy plea on Strange’s behalf. While he acknowledged that his other contestant, Nico, had performed well in the Instant Save, he spent a large majority of his allotted time championing Strange instead.

“There is an unbelievably talented little girl right now who is not able to fight for her position on this show,” Levine said, noting how he has two daughters of his own. “The thought of breaking her heart by not urging everyone to give this girl a shot to go and redeem herself next week would be too far beneath me.”

Levine’s comments left viewers outraged, saying that he threw Nico under the bus in favor of saving Strange. Many fans were so upset over what Levine said that they took to social media and called for him to be removed from the show.

Adam needs to be removed as a coach. Period.#TheVoice

@NBCTheVoice Adam should be removed from the show. He showed his bias. No coach should every do what he did to DeAndre #TheVoice

An Eliminated DeAndre Speaks Out

But even though fans were still feeling furious about the situation days later, neither Levine nor The Voice addressed the controversy. This of course, angered fans further, though some held out hope that it would be acknowledged when the show returned on Monday night (December 10).

Prior to that, Nico broke his silence on the whole situation during an interview with local Texas news station 12NewsNow. During that interview, he made it clear that he was hurt by what Levine said…or rather, what he didn’t say, the night he was eliminated from The Voice.

“It was just weird,” he said. “I’m not being rude. I just felt like he sold me out… and I just don’t respect it. I’m just being honest.”

After Nico’s comments, you can bet that a ton of viewers tuned in to The Voice to see if the scandal would finally be addressed. And although it was mentioned, it probably wasn’t in the way that many fans had hoped it would be.

During the pre-taped rehearsal package, Levine briefly broke his silence on the ordeal, telling Strange, “It was a strange week, but it’s over now. DeAndre’s my boy. I love him. We talked.”

The package also showed a clip of Strange video chatting with Nico as he wished her luck and encouraged her.

But if fans were hoping for a live acknowledgement of the controversy on-air, they didn’t get it. As you would expect, many viewers are still furious over the whole situation.

So no mention of last week’s fiasco???? This the last damn season for me. The lack of professionalism is astounding #TheVoice

#theVoice just because DeAndre is a class act doesn’t mean Adam Levine is fair or forgiven for his reprehensible actions last week.

"We talked, it's all good"-Adam lol I don't believe it's all good, but whatever helps u sleep better at night #thevoice

What do y’all think? Did The Voice and Levine do enough to recognize the controversy, or do you think they should have done more?