By Jennifer Pernicano on April 29, 2021
Advertisement 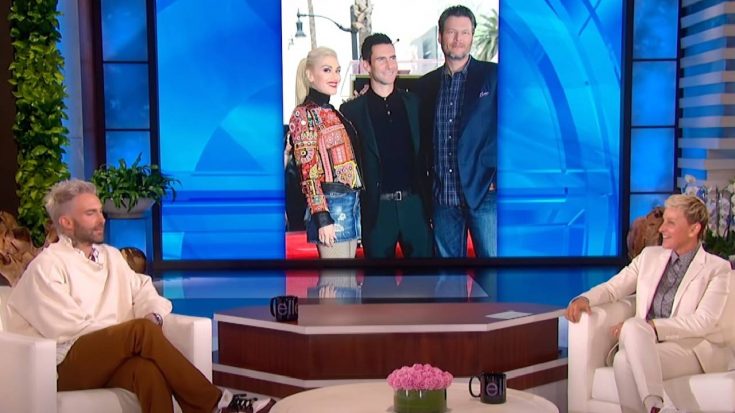 Last October, Blake Shelton and Gwen Stefani announced to the world that after five years of dating, they would be getting married. Since then, all anyone can talk about is their upcoming nuptials, which will likely happen at some point this year.

Heck, even Adam Levine is asked about Blake and Gwen’s wedding. It’s been rumored that he will perform, but he shot those rumors down by saying the couple can’t afford him!

Now, during an appearance on The Ellen Show, Levine spoke with the talk show host about his former co-star’s upcoming wedding, where he says he will have a very important role: the objector!

The Maroon 5 frontman told DeGeneres, “I don’t support their marriage,” due to the fact that “she is so cool, and he is not.”

Though in a T-Mobile Super Bowl commercial, it shows Levine setting up the odd couple.

DeGeneres tried to defend the country singer by saying Shelton is “very funny and very smart,” but Levine shot back, “He is vaguely charming.” His insults almost felt like he was back on The Voice set! And Levine agreed.

“I miss this. I miss making so much fun of him,” he said. “I’ll go to the wedding and I’ll object. I will probably not be invited now that I’m saying this on live television. But I’ll be there somehow.”

Watch his interview with Ellen below.