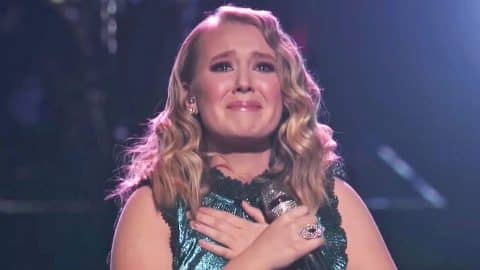 If you have ever heard Tim McGraw‘s “Humble and Kind,” then you know how it’s capable of stirring up powerful emotions. The song had a profound impact on those who listened to it, and that impact was recognized at the highest possible level.

For you see, in addition to winning a number of other awards, “Humble and Kind” was selected as the Best Country Song at the 59th Grammy Awards.

This recognition is all the more remarkable considering the fact that “Humble and Kind” was only written by one person, the immensely talented Lori McKenna. Thanks to her skilled songwriting and McGraw’s passionate delivery, the song has been one of the most meaningful country singles released in the past decade.

During the first night of the Season 13 Voice finale, 16-year-old finalist Addison Agen took to the stage to offer up her own rendition of “Humble and Kind.” If you thought McGraw’s original version was emotional, just wait until you watch Agen’s performance.

Almost from the get-go, you could see tears forming in Agen’s eyes as she sang. It’s clear that the weight of both the song and the moment were resting heavy on her, but she powered through.

Despite the tears that constantly threatened to fall from her eyes, Agen managed to deliver a strong performance. The fact that she was emotional added a sense of realness and vulnerability to her performance, which was fitting considering the type of song that “Humble and Kind” is.

She Couldn’t Keep From Breaking

However, as hard as she tried to fight back her tears, Agen couldn’t keep them in the entire time. At the end of the performance, Agen tried to sing but the words failed to come out of her mouth.

Finally, she let the tears fall, and held her hand over her heart as she looked out at the audience who was showering her with applause. She tried one more time to finish the song, but only managed to make a small sound before she began crying again.

You can watch Agen sing “Humble and Kind” in the clip below.

This performance goes to show just how well Agen is able to connect with the material she sings. At such a young age, that’s an amazing ability for her to already possess as a singer.