Adele Shares What It’s Like To Work With Chris Stapleton

By Miranda Raye on November 23, 2021
Advertisement 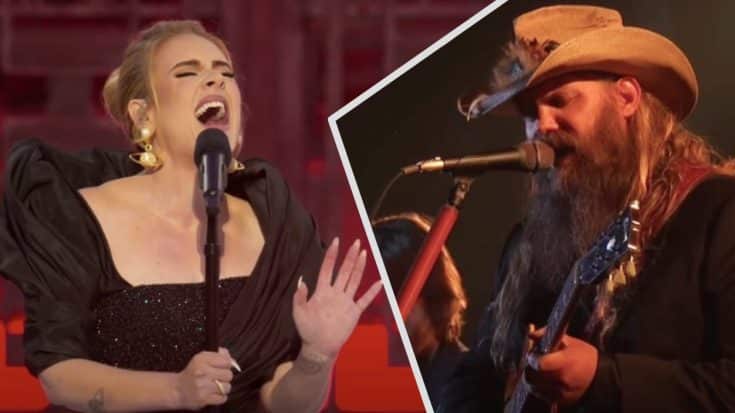 Long before Chris Stapleton experienced his breakout moment at the 2015 CMA Awards, he had a huge fan in the music world. That fan was Adele.

Adele has loved Chris’ work for years. She followed him back when he performed with a group called the SteelDrivers, and recorded one of their songs.

The song Adele recorded was “If It Hadn’t Been for Love.” She featured it on a limited edition release of her 2011 album, 21.

Chris co-wrote “If It Hadn’t Been for Love” with his SteelDrivers bandmate Mike Henderson.

Adele has wanted to work with Chris ever since she covered “If It Hadn’t Been for Love.“ But the stars didn’t immediately align for them to be able to collaborate.

Finally, Adele and Chris got together to record a duet version of her new song, “Easy On Me.” Their duet is a bonus track on the Target exclusive edition of Adele’s new album, 30.

Adele recently spoke with Rolling Stone about what it was like to work with Chris after all this time:

“Basically, I’ve been a fan of him since SteelDriver days,” she said. “I’ve been covering SteelDrivers for like nearly 12 years now. It’s just… his voice is just f—— brilliant.”

Adele went on to speak about how their duet came to be. Because of everything going on in the world, they weren’t able to sing together in person when they were recording the song.

“We had to start over Zoom,” Adele recalled. “It was devastating.”

But Adele is happy with how everything turned out. “I think our voices work brilliantly together…[he] would’ve been one person that I would’ve always have said yes [to], like 100%,” she said.

You can listen to Adele and Chris’ version of “Easy on Me” in the clip below. We think the wait for this duet was well worth it!