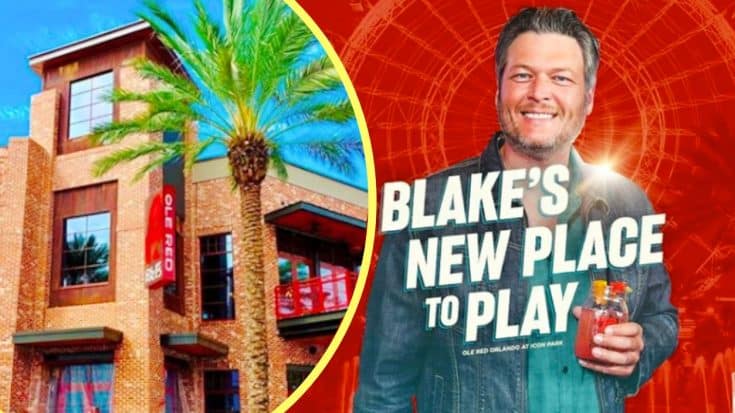 In 2017, Blake Shelton opened his first Ole Red location in his adopted hometown of Tishomingo, Oklahoma. The bar/restaurant/music venue soon became one of the go-to spots in the small town, which has a population of just over 3,000 people.

All three Ole Reds have proven to be successful, leading Shelton and the Ole Red team to add a fourth location to the lineup. News4Jax reported in January of this year that the fourth Ole Red location would be in Orlando, Florida.

“When it opens, the 17,289 square foot Ole Red will offer a live music experience and feature concert-quality lighting, up-to-date acoustics and seating for about 500 people,” News4Jax reported. “Guests can also expect private event space for weddings and other gatherings plus three bars.”

Have you heard? Tell all your friends, and we’ll see y’all soon!

Ole Red Orlando was originally scheduled to open its doors on April 13. But due to the world environment, its opening was delayed.

In a video on Ole Red Orlando’s Instagram, Shelton announced the location has a new opening date…and it’s soon!

Shelton mentioned how his birthday is on June 18, but said something even more exciting is happening the following day, June 19. That’s the day Ole Red Orlando is opening!

Shelton said the “music situation” is yet to be determined based on whatever stage of reopening the state of Florida is in at the time. But he promises it will still be a good time, and encouraged people to come out and celebrate the grand opening.

It’s surely a relief for Shelton to hear that Ole Red Orlando got the all-clear to open after months of delays. We can’t wait to see what it’s like!

Orlando…do you know what makes a Monday better? Let’s start with @blakeshelton announcing that Ole Red Orlando will be opening on Friday, June 19th! We can’t to meet you! ?