By Jennifer Pernicano on October 2, 2019
Advertisement 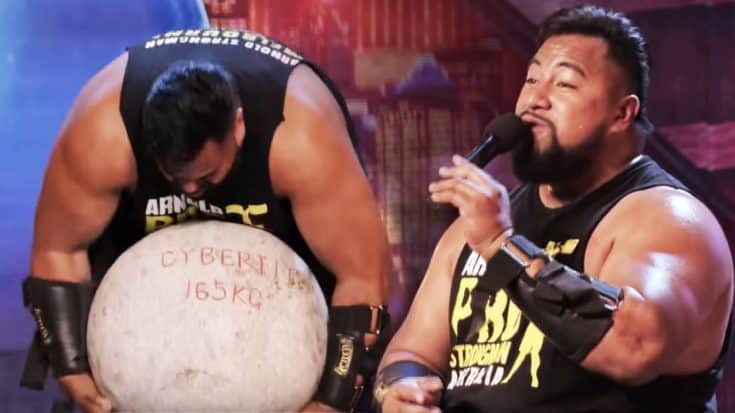 Eddie Williams is no rookie to competition. He has competed in countless strongman competitions, and is the reigning Australia’s Strongest Man. Actually, he’s won that title twice now!

Williams took his talents worldwide when he decided to audition for Australia’s Got Talent this year. He demonstrated his strength to the judges by lifting spherical concrete weights.

The first concrete weight he rolled out said 150 KG, which is roughly 330 pounds. He lifted it straight up with ease and set it on a stack of tires. He then walked offstage to roll out another concrete weight. This one said it was 165 KG, or 363.763 pounds.

Once again, he picked up the concrete sphere, but this time, had a little more trouble with it. As he paused with it on his legs, the judges gasped in fear he would hurt himself. But he was able to lift the sphere onto the stack of tires. He walked off stage once again and one of the judges, Nicole Scherzinger thought he would be rolling out an even bigger ball.

He brought out a large, wooden, door-like object and rested it on top of the spheres. He then took a seat on top of it.

Everyone stared in confusion when all of a sudden, he began singing John Legend’s 2004 Grammy Award-winning song “Ordinary People.”

After singing the final few notes, the audience erupted into cheers, and all four judges gave him a standing ovation. He received high praise for his unconventional and surprising audition – and received four resounding yeses!

Although the season is now over, and Williams was eliminated in the semi-finals, his audition is making the rounds online, with once particular Twitter user’s upload getting over 17 million views!

Legend himself even responded.

The singer tweeted, “Ok, I never considered performing Ordinary People like this!”

Ok, I never considered performing Ordinary People like this! https://t.co/umpXLfQahx