By Manly Bryant on August 28, 2018
Advertisement 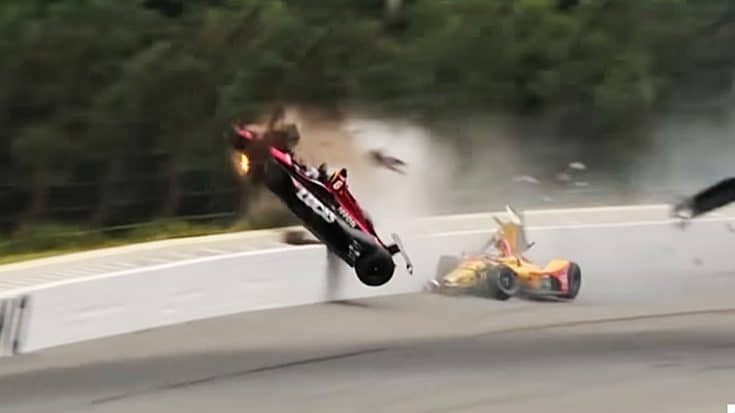 He was airlifted to the hospital after a severe crash at Pocono destroyed his car and left him with significant injuries on Sunday, August 19th.

During the 2018 ABC Supply 500, following a restart on Lap 7, 29-year-old Canadian INDYCAR driver Robert Wickens was running side-by-side with American Indy champ Ryan Hunter-Reay when Wickens tried to pass him.

The cars slightly touched, causing Hunter-Reay’s car to slam into the outer wall, but Wickens got dragged along with him and launched up over the wall – flying into the catch fence and ripping his car to shreds as he flipped over and over.

BRUTAL CRASH!!! Wickens crash in slow motion… ??? Robert Wickens is awake and alert. He has been transported by helicopter to Lehigh Valley Hospital-Cedar Crest. #Indycar#Pocono pic.twitter.com/ttoTSGlW35

The fencing he catapulted into was shredded and so was his car – which came to rest near an inside wall and was reduced just to the tub of the car. Emergency personnel rushed to his aid and he was flown via medivac to an Allentown, PA hospital.

Now, while he was reported as “awake and alert” after arriving at the hospital, doctors are unsure of how much spinal damage he has suffered.

On Monday, August 20th, Wickens underwent surgery to stabilize his spine and had titanium rods and screws placed in it without any complications. While doctors are unsure of the exact extent of his spinal damage, he is making strides in his recovery.

I was there for you then, I’m here for now, I’ll be there for whatever you need to get back! Missing my little bro big time, but he’s in good hands. Sorry I’ve been MIA but thank you so much for all the messages & support for @robertwickens. Gotta bring him home some hardware! pic.twitter.com/gPAMzCeuLv

In a new update released on Saturday, August 25th, 2018, Wickens’ team Schmidt Peterson Motorsports reveals that for the first time since his injury, Wickens is able to breathe on his own without assistance from a machine – and he’s also able to speak with his family during this time.

“Robert’s family and the entire SPM organization are very pleased to share this information and wish everyone a safe event tonight in St. Louis,” the team added.

We are pleased to provide an update on Robert Wickens:#GetWellWickens ❤️? pic.twitter.com/KmxLQNZ5KU

Our thoughts and prayers are with Robert Wickens as he works toward recovering from this terrifying crash and his injuries.