By Miranda Raye on August 29, 2018
Advertisement 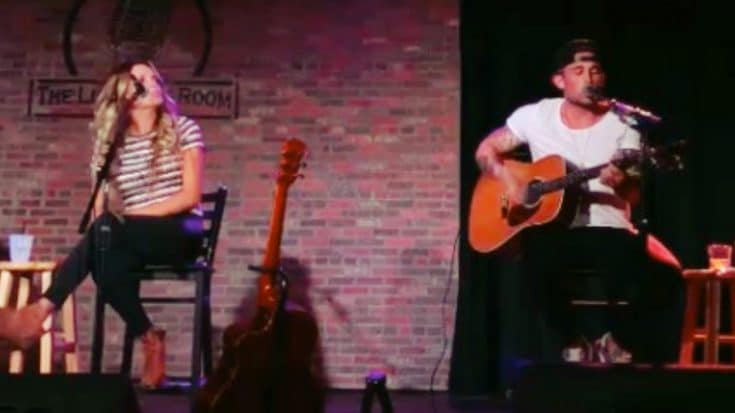 Every now and then, two country singers meet, fall in love, and form a power couple that’s a force to be reckoned with. Just take Waylon Jennings and Jessi Colter, Tim McGraw and Faith Hill, or Garth Brooks and Trisha Yearwood as a few examples.

Now, there’s a new country-singing couple in town, and fans have fallen in love with them just as fast as they fell in love with each other.

In July, “Every Little Thing” singer Carly Pearce and “Kiss You in the Morning” singer Michael Ray confirmed the news that fans had long suspected, but never knew for sure. They’re dating!

The two shared matching photos of themselves snuggling up to each other, revealing their relationship with similar captions.

And then one random night at the Nashville Palace changed everything. ❤️ [photo: @rkdeeb]

Although the couple waited until July to go public with their relationship, they had actually been dating in secret for a while longer. And Pearce’s infatuation with Ray goes back even further than that.

As Pearce recalled during an interview with CMT’s Cody Alan, she remembers having a crush on Ray “for a really long time.” Not knowing how to share her feelings with him, Pearce took to frequently commenting on Ray’s Instagram story. While it took a while for him to figure out her intentions, it eventually clicked.

Ray obviously had feelings for Pearce as well, and their romance blossomed. The two now flood their social media profiles with photos of one another, each one somehow sweeter than the last.

In early August, the couple finally brought their romance to the stage when they performed together at the Grand Ole Opry. Appropriately, they chose to sing a duet by one of country music’s most famous couples, Johnny and June Carter Cash.

The two sang the Cash’s iconic duet “Jackson,” and had fans swooning over their onstage chemistry.

After that experience, it seems that Pearce and Ray can’t get enough of singing together. The two recently teamed up for another duet, this time on Ray’s steamy song “Think a Little Less.” While performing at The Listening Room in Nashville, Pearce had Ray take to the stage to sing the song.

But instead of stepping off to the side, Pearce remained next to Ray on stage, offering her own voice for some support. The result was a sweet duet that is sure to make you believe in love again.

Go ahead and watch a piece of Pearce and Ray’s duet in the clip below. Aren’t they the cutest?