After Sleeping Dog Farts Cat Smacks Him On The Head 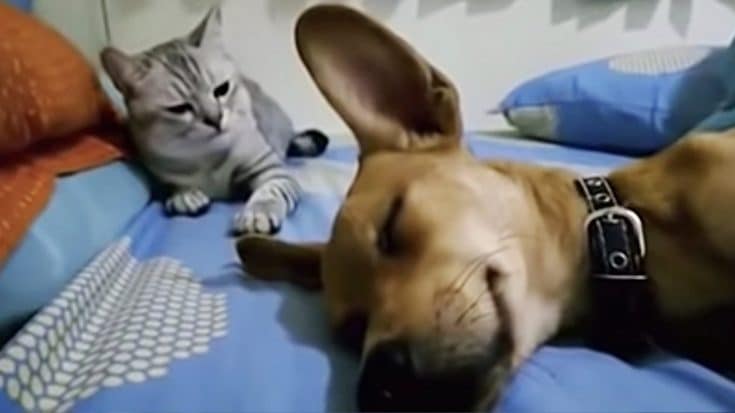 Get ready to roll on the floor laughing your socks off! This has got to be one of the most hilarious pet videos of a cat and a dog that we’ve seen in a long time.

The owner of the two fluffy critters installed a hidden camera next to the bed so that she could keep a close eye on them when she’s not at the house. It works out perfectly because they both love to lay on the bed when she’s gone.

When the video starts, you can see them both laying on the bed. The dog is peacefully asleep, and the cat is looking towards the dog’s butt like it had already farted once before. However, the video continues and the cat’s eyes slowly start to close as it’s about to fall asleep.

The Cat Smells The Stinky Gas

Then all of a sudden you hear the dog let out a long and loud fart. The cat’s eyes immediately look at the back of the dog’s head and he squints his eyes at the dog as if he didn’t like what just happened. Apparently, this is right when the cat smells the stinky gas and proceeds to get up and give the dog two major smacks to the top of the head.

The dog opens his eyes and lifts his head up as he’s rudely awoken from his sleep and looks around trying to figure out what just happened. After collecting his thoughts for a couple of seconds the dog lays his head back down and falls asleep while the cat continues to stare at him.

You’ve got to watch this video below to hear the dog fart!