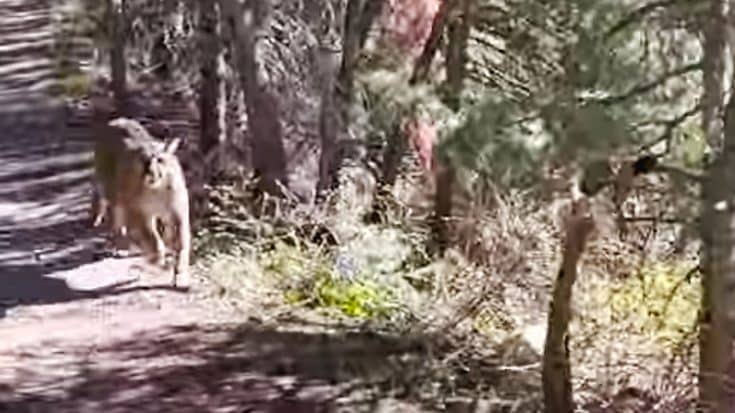 A Utah hiker is lucky to be alive after a very close encounter with an aggressive mountain lion on a canyon trail.

Salt Lake City local Jared Smith told FOX13 News that he was hiking on Thursday, May 13th, 2021 along Broads Fork Trail when he was surprised by a large cougar that appeared on the trail in front of him.

ICYMI: There was another incident of a person filming a cougar encounter on a trail in Utah. They said they remembered (and also followed!) a lot of the safety tips @UtahDWR recommends. Here are those tips again, as a refresher: https://t.co/N5l97e3yFU https://t.co/gPj5EK3jaf

This is the second time in a year that a Utah hiker has been aggressively chased by a cougar in the trails around Salt Lake City and the Utah Division of Wildlife Resources has offered up some helpful tips to stay safe when in cougar territory.

“I was running back down the trail and was probably about a mile from getting back to the parking lot when I heard something off to the side of the trail,” Smith told the local news outlet. “[I] looked and there was a cougar probably 15-20 feet away from me… Definitely startled me.”

Taking the UT DWR advice to heart, he says that he tried to make himself appear bigger and used a loud voice, maintained eye contact, and backed away slowly. While he only captured about two minutes of the encounter on video, he says it went on for upwards of five or more.

“Periodically, the cougar would pounce and was baring its teeth and kick its legs and its tail up, almost like a little sprint right at me,” Smith said. “If you watch the full video, you can see my voice kind of crack at those points in time because it scared me.”