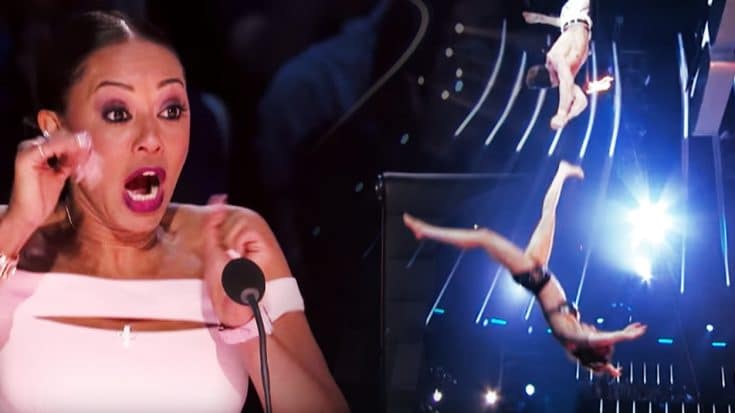 In one of the most jaw-dropping and utterly shocking episodes of America’s Got Talent, a fit and friendly trapeze pair endure one of the scariest accidents to ever happen on the show.

This husband-wife-duo is known for their death-defying and dangerous trapeze act – that’s exactly how they got through the first round of the show! Their audition was absolutely stunning…but in this new episode, they push the envelope a bit too much and leave everyone gasping.

Duo Transcend as they’re known, have been performing for years together. They know the ins-and-outs of each other’s movements and body language. Unfortunately, Tyce, the husband has terrible eyesight and is waiting for surgery – so his vision won’t be of much help.

The pair has a young son, Jaxx, who has to stay home while they’re on the road – so they hope that by winning America’s Got Talent, they’ll be able to stay in one spot performing and have Jaxx with them all the time. They’re a dedicated and very fit family, but work keeps them away sometimes.

Tuesday night @AGT this day was emotional for us, we hadn’t seen Jaxx in almost a month because of work. We knew we would see him the day after this. #duotranscend #agt #agt13 #cirque #duotrapeze #gymnastics pic.twitter.com/0zX5FYQsNx

During the most recent episode in which they performed, Tyce and Mary amped up the excitement and danger by attempting a dangerous death drop stunt – but Tyce was completely blindfolded.

As Mary climbed up to the top of the trapeze, he laid back and helped her get into position. In just a few seconds she was lying parallel to him upside down against his body. She would attempt to slide down him, head first, and have him catch her by the ankles.

In the wind-up to the stunt, the music got incredibly dramatic and they added unique and stunning flourishes to keep the audience engaged. All the judges were sitting in trembling fear and anxiety as they watched the act prepare. It was truly a nail-biting moment.

With a swift move, Mary slid down her husband toward the ground at a break-neck pace and held her body as still as possible so he could catch her. As her ankles reached his hands, he grappled for a grip but both her feet slipped out of his hands – sending her plummeting to the ground in a moment that will leave you breathless!

Watch the full video below – but beware, it’s absolutely gut-wrenching.