By Manly Bryant on April 22, 2021
Advertisement 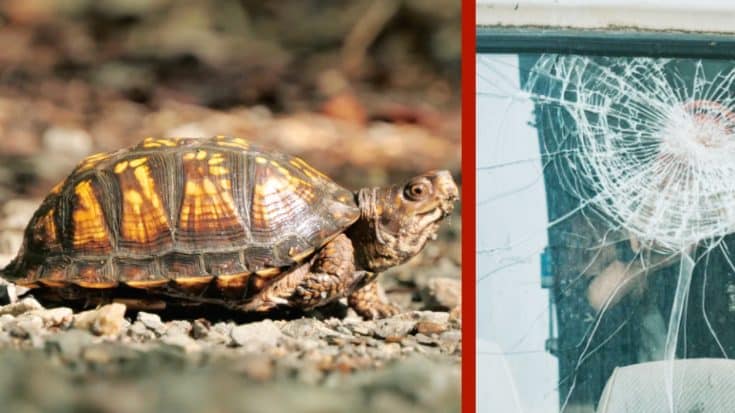 In Florida, a turtle seemingly fell from the sky and crashed through a windshield of a vehicle.

The incident occurred on Interstate 95 near Port Orange. The turtle broke through the glass windshield and injured a woman in the passenger seat. The 71-year-old passenger suffered a laceration above one of her eyes and was taken to the hospital for treatment. At the time, the injury was estimated to be a half-inch to an inch deep.

The woman’s daughter was driving the vehicle, but the accident happened so quickly that the daughter was confused about what assaulted her mother. When another motorist stopped to check on the two women, the daughter asked the other driver to help identity what crashed through the window. In the 9-1-1 dispatch, a man’s voice informs the woman that a turtle is in the car.

“A turtle!” the daughter gasped. “An actual turtle?”

Initially, the woman had told the dispatcher that an unidentified object “just came through the windshield” and hit her mother in the head. While the victim did not lose consciousness, the daughter remarked that her mother had “so much blood coming out of her head.”

“I swear to God this lady has the worst luck of anything,” the daughter explained.

According to Florida Highway Patrol Lt. Kim Montes, another turtle crashed through a windshield in Volusia County in 2016.

See a photo from the 2016 incident below.

For more on the story, check out the following video.