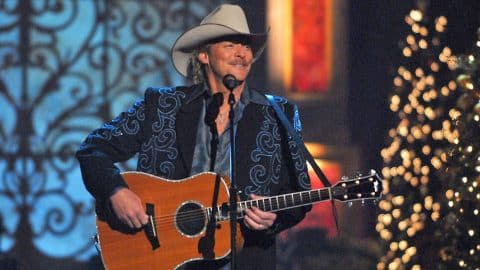 Country legend Alan Jackson is a sucker for traditions. The “Chattahoochee” singer shared his holiday plans for this year and just the way he likes to keep them. With just a cup of joe and his family, Jackson prefers to live the simple life while celebrating the special day.

ALAN JACKSON WITH HIS FAMILY

Every year, Jackson celebrates Christmas alongside his wife, Denise and their three daughters, Mattie, Ali, and Dani. With all of his daughters now in their 20s, it’s the perfect time to get the family all together. In a recent press release with UMG Nashville, the singer admitted his family keeps the Christmas traditions pretty relaxed.

“Christmas is pretty traditional. We don’t let anybody open any presents until Christmas morning.”

Jackson continued that he prefers to wait until everybody is together before starting the big day.

“Everybody has to wait and kind of get situated and maybe have a cup of coffee, and then we start all of the regular Christmas morning activities, opening presents, taking pictures and videos.

As he loves to keep the traditions alive, he still makes his girls wait to come down the stairs to see the all the presents under the tree Christmas morning.

“We have music going, you know, I try to keep Christmas music going in the background. I like to turn that on before I let them come down to the tree and everything.”

Aside from keeping his favorite traditions alive, Jackson has been ringing in the holidays for years. In 1993, he released his first Christmas album Honky Tonk Christmas. Following the success of that album, Jackson released his second Christmas album Let It Be Christmas. The second album was composed, for the most part, of traditional Christmas song renditions by the singer. The title track got a spot on the Billboard charts that same year.

It doesn’t sound like Alan Jackson has any plans of changing his special day anytime soon! We love a good tradition.