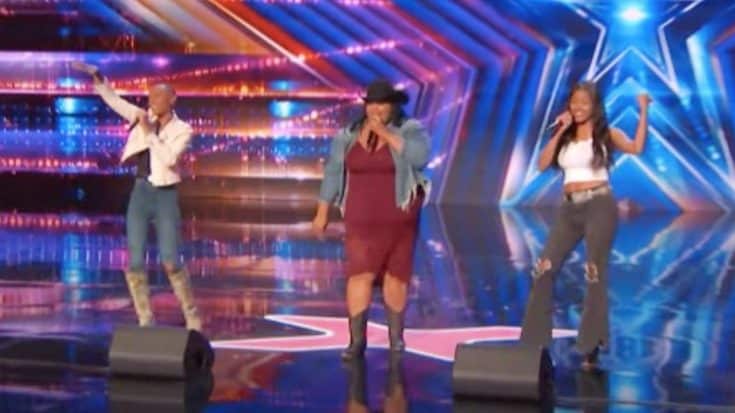 The judges and Crews bent the rules a bit for one special country trio who auditioned for Season 17. The group, called Chapel Hart, took to the stage with an original song. The song serves as a tribute to country music icon Dolly Parton, with its title being “You Can Have Him, Jolene.”

People in the crowd were chanting “Golden Buzzer” after Chapel Hart finished their performance. Simon Cowell and Heidi Klum had both used their Golden Buzzers by then, though they made it clear they’d love to give Chapel Hart a Golden Buzzer too.

That’s when the judges and Crews gathered in a huddle and decided to do something unexpected. All five of them reached forward to press the Golden Buzzer together!

The members of Chapel Hart were shocked to see the reaction to their performance. They couldn’t believe their eyes as the gold confetti rained down on them onstage.

All of the judges rushed to give the singers hugs while the audience continued to cheer.

You can watch Chapel Hart’s extraordinary audition and their Golden Buzzer moment below. The group ended up placing fifth during their season, and they’ve since had the chance to perform at the Grand Ole Opry. Congratulations to them!