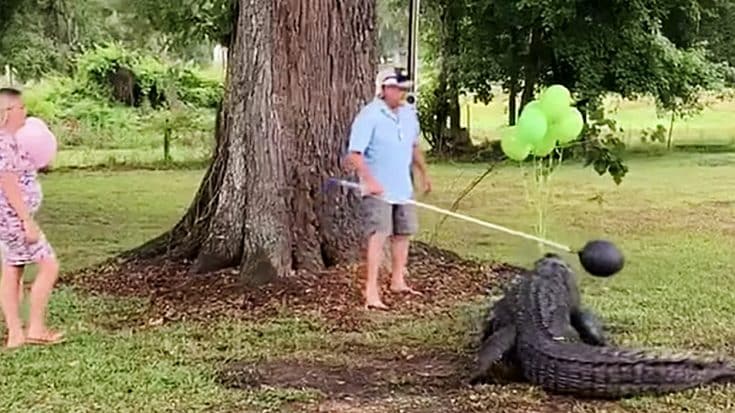 New Baby On The Way

Stacie Childs-Wright and her husband Chad have a new baby on the way and they’ve decided to reveal the baby’s gender in the most Floridian type of way possible, with an alligator!

That’s right, they invited their family and friends over for a Gender Reveal Party and how they planned to reveal the gender is by putting a balloon filled with colored powder on a long stick for the alligator to pop.

The gator’s name is Amos, and has been the family pet for 19 years now. To most people, it’s illegal to own an alligator but Chad is not just anybody. He’s a nuisance wildlife trapper and has a special certification to house Florida’s wildlife creatures.

The Gender Is Revealed

Chad, wearing no shoes, walks up to Amos with the balloon on the stick and the gator bites down. POW! Pink powder flies into the air and everyone now knows the baby is gonna be a girl! The family laughs and cheers while dad walks away like he lost the bet. Apparently, he wanted a boy.

“I told you, oh, Mr. It’s-a-boy.” Stacie says as her husband stands with his hands on his hips.

He then smirks and smiles at Stacie before putting his hands over his eyes. You can hear the family in the background telling him to “pay up” because he lost the bet. Such a dangerous way to reveal a baby’s gender but we got to hand it to these Florida locals, it was pretty cool.

ONLY IN FLORIDA???: A Tampa couple used their pet alligator to help reveal their baby's gender. Yes… we said PET alligator. https://bit.ly/2wM8QbA