By Manly Bryant on April 6, 2021
Advertisement 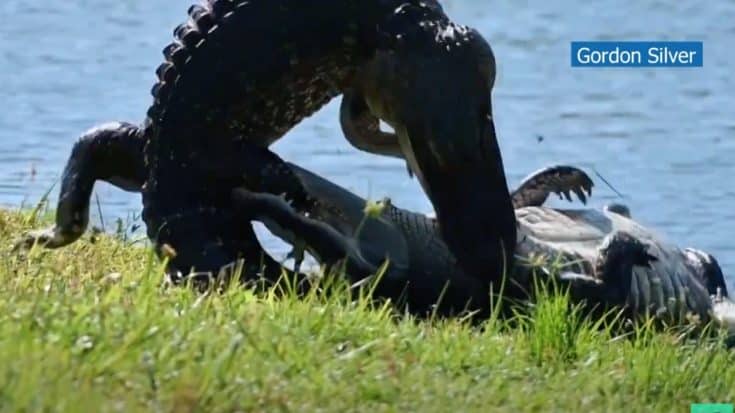 Gordan Silver from Lakewood Ranch in Florida shared a great video of two alligators getting into a wrestling match in his backyard.

“When I heard the gator mating call from inside my home, I immediately grabbed my camera and dashed outside to investigate,” he told FOX 13. “I’m a big nature photographer and capturing wildlife right from your own back yard is something I always wanted to do.”


He grabbed his camera and sprinted out the door to film the gators that were in the process of squaring off. One was sunbathing next to the shore and a smaller one crawled out of the water to challenge the bigger one.

As the smaller one dragged its belly towards the big one, the big one stood up off the ground on all four legs and flexed its muscles. It was trying to show the little one that it should not mess with him but his intimidation tactics did not work. He then decided to shove and bite down on the smaller gator’s leg.

The little gator bit him back, and the big one didn’t like that, so he took it to the next level and started doing the notorious death roll.  He spun and flipped the little gator, slamming him to the ground like a professional wrestler. Gordan was so happy that he got to witness it in person and capture a video to share with the world.

Gordan said he “didn’t have to leave [his] back yard to capture these 2 gators tossing each other around at the beginning of the 2021 mating season.”

Watch Gators Do Battle Below